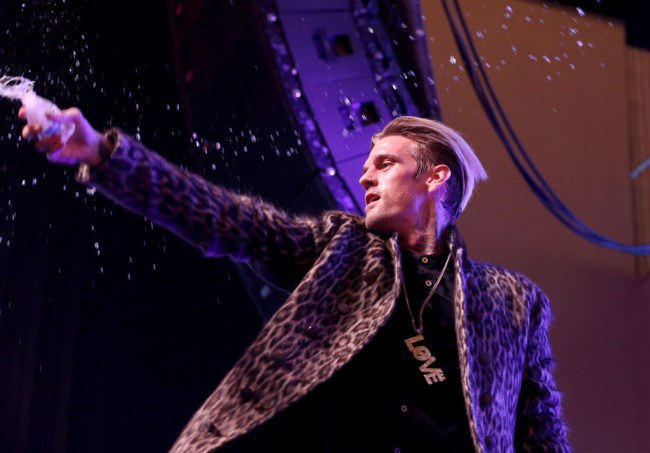 Aaron Carter was born in Tampa, Florida, but he is currently not ready to scream any patriotic “USA!” chants. The pop singer said America is “really foul” and meant it. Carter was so appalled by the United States that he bought a mansion in Canada.

Carter has made many headlines in 2019, whether it is threatening to punch Leaving Neverland star Wade Robson in the face for making accusations against Michael Jackson, having a wild family feud with his more famous brother Nick Carter, getting a massive face tattoo of Medusa inspired by Rihanna, claiming that Eminem’s Killshot diss track was garbage, and he would destroy Machine Gun Kelly in a freestyle rap battle.

But Aaron Carter is unhappy with people here in the U.S. and the coverage the media has provided him. The 31-year-old singer moved to Halifax, Nova Scotia. Carter announced on Instagram that he had purchased an 8-bedroom, 9,000-square-foot mansion in Canada. Did America just trade Aaron Carter for Nickelback (Sales are up 569% since President Trump tweeted the Canadian band’s music video in a meme), and if so, who won that deal?

Carter said this home was the first home he ever purchased, and “its a f*cking castle.” The property comes with a “rec room, a thot tub, a study, and a fireplace in every room,” plus “free maple syrup for life” according to Carter. The singer did not say how much the house cost, but prices for similar houses on the Canadian island go for anywhere between $350,000 to $4 million according to Zillow.

I just Purchased my first ESTATE ITS A FUCKING CASTLE 🏰 it’s 9,000 square feet and 8 bedrooms a REC ROOM, a STUDY a fire place in every room. It comes with free maple syrup 4Life maple on tap 🍁#HouseOfCarter #ScotianPotion #Blessed. #levelup

Carter also said that he is donating a wad of cash to his new community, where he is “here to stay.”

Carter said he picked Nova Scotia because “my brother-in-law Mike lives here and my niece Alyssa so I have family here and Nova Scotia is one of my FAVORITE PLACES IN THE WORLd! Plus it makes for shorter flights for Europe tour.”

So I’m about to get a rental car and drive a few hours to go see my new home. I’m move fast. 😈 My Brother in law Mike lives here and my niece Alyssa so I have family here and Nova Scotia is one of my FAVORITE PLACES IN THE WORLd! Plus it makes for shorter flights for Europe tour

Aaron Carter said the move to Canada was because he was upset about how he was treated in America. Carter tweeted: “I hope Canada welcomes me and doesn’t treat me the way people do in America it’s really foul I had to get out and I moved quick. Pun intended.”

I hope Canada welcomes me and doesn’t treat me the way people do in America it’s really foul I had to get out and I moved quick. Pun intended.

It was only a few years ago that Carter experienced financial issues. In November of 2013, Carter filed for bankruptcy in the state of Florida. According to legal documents obtained by TMZ, Carter had assets worth a total of $8,232.16 including a 61-inch flat-screen TV worth $500, two MacBooks, two headset mics, a mini keyboard, a speaker, a guitar, a Louis Vuitton back bag, a printer, a Breitling watch worth $3,750, and $60 in cash.

“Aaron filed for Chapter 7 Bankruptcy protection to alleviate past issues in an effort to move forward with his life and career,” Carter’s rep Steve Honig said in a statement. “The overwhelming majority of the debt he is asking to be discharged is from more than 10 years ago when he was a minor and not in control of his finances.”

To Carter’s credit, he said he didn’t like how he was treated in America and he moved to Canada, the same threat that many other celebrities have promised in the past and are still living and thriving in the United States.