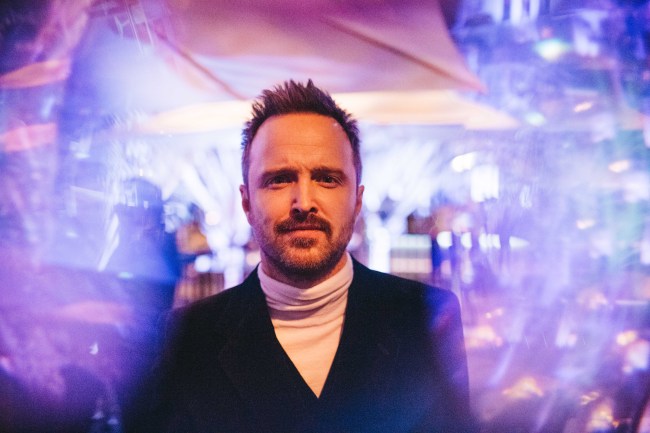 Actor Aaron Paul is a native of Emmett, Idaho. This is a ‘city’ in Gem County, Idaho with a population of just over 6,500. I’ll be honest, that sounds like a BADASS place to grow up.

I’ve never been to Idaho. It’s very high on my list of places to visit though because it’s supposed to be one of the most gorgeous states in America. Excellent trout fishing. The lentil capital of the world. Producer of 1/3 of America’s potatoes. It’s against the law there for a guy to give his beloved a box of sweets weighing more than 50 pounds…Can you tell I’ve been Googling facts about Idaho because I don’t know jack shit about other than it’s home to world-class trout fishing?

Anyway, Aaron Paul has a glorious log cabin mansion about 2.5 hours away (driving) from Boise and he recently opened his doors to Architectural Digest for a tour of his remote cozy estate and it looks incredible. There is a full-sized movie theater stocked with candy. His bedroom and bathroom(s) look like something you’d expect to see in Beverly Hills.

And the Whiskey Lounge is something out of my wildest dreams. I’ve got a pretty respectable man cave but nothing close to what Aaron Paul’s rocking out there in Idaho. Check it out:

READ NEXT: Take A Look Inside The Sick Sunset Strip Home ‘Breaking Bad’ Star Aaron Paul Is Selling For $2.198 Million

For anyone who took notice of Aaron Paul’s beer options, he has two on tap, a dark beer and an IPA. These are two local beers from Broken Horn Brewing in McCall, Idaho. If you’re curious about those you can click here to visit that brewery’s website.

In addition to that clip, Architectural Digest did a full write up on Aaron Paul’s Idaho estate complete with some pretty cool interior photography. Here are some highlights:

The guest-bath vanity is fashioned out of reclaimed Wisconsin barnwood, a material found throughout the house, including the raftered ceilings of the living room. You can see ax marks on the crossbeams. The sauna is sheathed in local cedar that, Paul says, came from “this giant tree that had just been pulled out of one of the lakes here.” And perhaps most striking is the omnipresence of Montana moss rock, a notable example being the 13-ton hearthstone in the living room. Paul, a self-described architecture and design obsessive, made sure to be on-site the day the colossal stone arrived. “I never thought I’d get so excited about rocks,” he said. “I found myself daydreaming about rocks.” (via)

I didn’t know that it was possible to own a home with such a heavy hearthstone without that home being classified as a European castle. This is just not something I realized existed outside of Europe and I’m stoked to learn that Aaron Paul’s out there in Idaho living the dream with this estimated $20 million net worth.

You can read that AD article in full by clicking here.