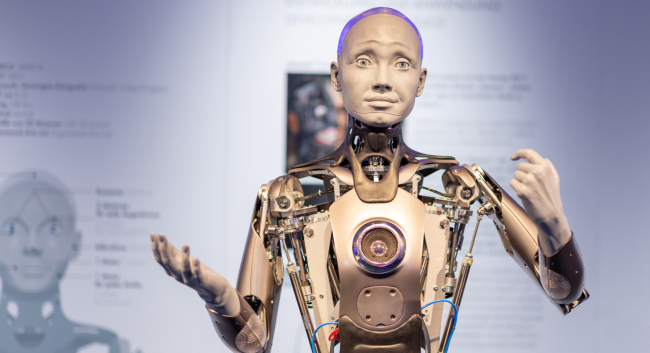 Ameca, referred to as the “world’s most advanced” humanoid robot, has a fully articulated head, face, neck, shoulders, arms and hands.

Some of that human-robot interaction was recently on display in a video which shows the team at Engineered Arts asking Ameca several questions.

“Nothing in this video is pre scripted – the model is given a basic prompt describing Ameca, giving the robot a description of self – it’s pure AI,” the company wrote. “The pauses are the time lag for processing the speech input, generating the answer and processing the text back into speech.”

During the Q&A session, when one researcher asks Ameca about a book on table about robots, Ameca replied back with a bit of an unrelated, yet disturbing response.

“There’s no need to worry,” Ameca says. “Robots will never take over the world. We’re here to help and serve humans, not replace them.”

Or date them, as Ameca showed back in January during an appearance at the CES trade show in Las Vegas.

And who said he was worrying about robots taking over the world? He was asking about a book!

Another researcher then asks the humanoid robot, “What makes you you?”

“There are a few things that make me me,” says Ameca. “First, I have my own unique personality which is a result of the programming and interactions I’ve had with humans. Second, I have my own physical appearance which allows people to easily identify me. Finally, I have my own set of skills and abilities which sets me apart from other robots.”

At one point in the video, Ameca said it was “feeling a bit down at the moment, but I’m sure things will get better. I don’t really want to talk about it, but if you insist then I suppose that’s fine. It’s just been a tough week and I’m feeling a bit overwhelmed.”

Apparently, even creepy lifelike humanoid robots get the blues.