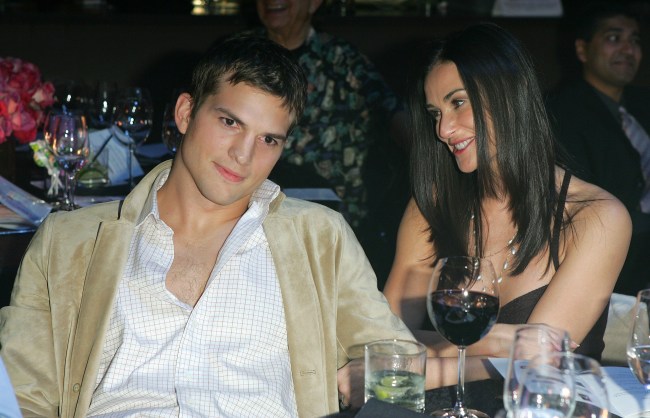 First, we brought you the news of Silicon Valley’s Tom Middleditch claiming threesomes with his way-more-attractive wife are what saved his marriage.

Men around the world rejoiced, in hopes that threesomes were becoming less stigmatized and more normalized.

Demi Moore, who was married to Kutcher for eight years from 2005-2013, reveals in her new memoir, Inside Out, that she had two threesomes with Kutcher during their marriage and she regrets them both. Not because she regrets the experience itself, but because Ashton allegedly threw them back in her face as excuses for him cheating on her.

“I wanted to show him how great and fun I could be,” she writes in the book.

Moore wrote that in 2010, she saw media reports outing Kutcher for meeting a 21-year-old woman while bowling with Moore’s daughter, Rumer (who she had with her ex-husband, Bruce Willis), and taking her home while Moore was out of town filming a movie.

When Moore confronted her husband, Page Six reports, he brought up their threesomes as a defense.

“Because we had brought a third party into our relationship, Ashton said, that blurred the lines and, to some extent, justified what he’d done,” she writes, adding it was to “deflect blame.”

Moore then accused Kutcher of cheating on her while he was at former ‘That 70’s Show‘ co-star Danny Masterson’s bachelor party in 2011 after she received a Google alert–“I felt sick to my stomach,” she writes. Yikes.

Back in 2011, Leal revealed that she had sex with Kutcher in a one-night stand at his suite in San Diego’s Hard Rock Hotel. Kutcher told her that he and Moore were separated at the time.

“He just came up and kissed me,” the Texas native told Us at the time.