The Best Order In Which To Orally Service Seven Phoenix Suns 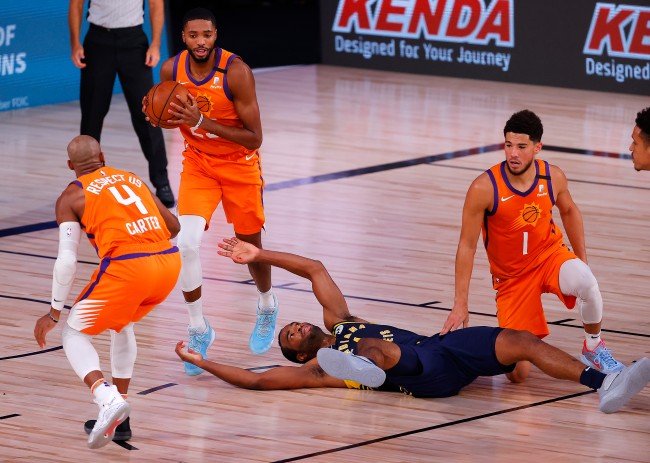 This clip has been making the rounds, pun intended, and I haven’t stopped thinking about the logistics since the moment I saw it. I had to put myself in Ms. Ayyye Jae’s shoes. Seven suns. Seven glistening, rippling, steaming, heaving, muscular, limber Suns orbiting me as though I’m the BIGGEST sun, the center of their milky way, on my knees in a Ramada Inn. Seems exhausting but definitely possible.

Evoking the timeless “mean jerk time” scene from Silicon Valley, I started to wonder about the logistics of keeping seven orbiting Suns satisfied. Which Suns’ members’ members would I service, and in what order would I get to them? NBA players have notoriously fragile egos. Teams are comprised of both stars and role players, veterans and youngsters. Just as GMs struggle to work within the confines of a salary cap, the oral operation is confined by the limits of the human jaw. Taking everything into consideration, this is the seven Sun lineup, in order, that would lead to the most efficient blowbang.

(To be abundantly clear, we do not know what Suns were serviced or if any were serviced at all. This is just what I think would make the most sense.)

No surprise here. What choice do you have? Devin has been the face of the franchise for five years. He makes $27 million/year. He scored 70 points in a game. You’re going to tell him to wait his turn? Don’t think so. He’s got babies to kiss, charitable galas to attend, and Jenners who won’t wait because he put his teammates first. Straight to the front of the line with you, good sir. To the franchise player goes the freshest mouth.

The smallest player on the active roster, Jevon Carter is the appetizer that lets the body know we’re in it for the long haul. In an ideal world, we’d have Jevon before Devin but, as I said, superstars are fragile. Jevon helps us ease in to the main courses and, in all likelihood, he’ll be gentle.

Kelly Oubre may be a junior to his father, but he’s a grown man to me. As we come into the heart of the lineup here, Kelly’s abdomen provides a timely reminder that this isn’t about me; it’s about the Phoenix Suns. This is my sacrifice for them to finally achieve a winning record. Oubre may have started his career in Washington, but he’s finishing on my gums.

Most people would put Frank off until last. But I’d rather couch him in the middle so I can use other players as a palate cleanser. Let’s be honest—and no offense to Frank—this one isn’t going down smooth. Something about the combination of his midwestern/Serbian roots makes my stomach queasy. You have to believe that milk is an integral part of his diet. Milk and the sort of meat you find in the mountains. Not to mention, at seven feet, I’m standing on the tips of my kneecaps and straining my neck like I’m trying to find my daughter at a parade. The combination of bodily discomfort and knowing that load is going down in chunks has me dreading him in the 4 spot, but once we’re past Frank, it’s smooth sailing to the finish line.

You may remember Ty Jerome as the starting point guard who led the Virginia Cavaliers to their 2019 national championship. One can only imagine the hordes of floral-patterned skirts and madras shorts that chased after Ty following their NCAA run. Everyone wanted a piece of this guy last year, but the NBA is a different world entirely. In his first season with Phoenix, he was a role player who averaged 10 minutes per game and bounced down to the G league frequently. Something tells me that Ty will be so grateful just to be in this hotel room with actual NBA teammates that he’ll will himself to the quickest arrival of the evening. Ty, Jerome.

If Aron’s beard is any indication, I’ll be pulling his pubes out of my teeth for weeks to come. Those are lingering pubes. They’ll be of that razor-wire variety too, that you can use for both flossing and cutting wheels of cheese. Collect enough and you can make a sponge for cleaning cast-iron skillets. Baynes typically finds himself on the receiving end of explosive finishes, so let’s hope he brings some compassion as the 6th seed (spiller).

Ricky Rubio is the tapas of loads. And thank goodness because at this point in the evening, I’m probably full. Calorically, it’s been a marathon. I can’t even think about how many 45-minute Alex Toussaint Peloton PR rides it would take to burn off all the calories I’ve ingested. So, blissfully, we’re left with this diminutive, shifty Spanish point guard as a zesty finish to our conveyor belt buffet. Ricky, there’s always room for you!