The Founders Of CBDEE.com Have Built And Sold Multiple Startups, Here’s Their Best Advice For Entrepreneurs 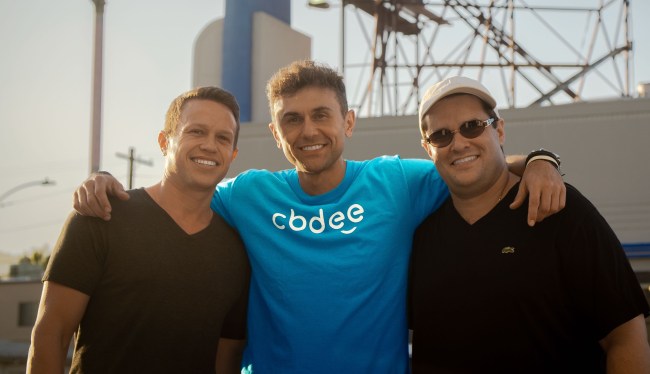 Entrepreneurship isn’t for everyone. But the brains behind CBDEE.com — Jon Bradford and Josh Sizemore — have made quite a career out of starting, building and selling successful companies. Between them they have over seven successful exits and by the time I finally publish this post they will probably have seven more. Jon and Josh have launched or run companies in numerous verticals — retail, beverage, media, mobile web applications, real estate — but it is their latest venture that they are most excited about… CBDEE.com, AKA the Amazon for CBD.

We recently got to catch up with Jon and Josh to get their best advice for young entrepreneurs and to hear more about what is going on with CBDEE.

BroBible: You guys are both successful entrepreneurs several times over. What has been the biggest reason for your success?

Josh: For me, it’s been a combination of a few things; believing in my idea, not giving up and continuing to grind and maybe most importantly, utilizing the relationships and folks I’m associated with, and not being afraid to ask for help.

Jon: Relentlessness. I’ve never given up on being an entrepreneur no matter how many times I failed. Having support from a great team and very understanding family can also make a world of difference.

Do you think ANYONE can be successful at being an entrepreneur or does it take a certain “type?”

Josh: I think about this a lot and obviously the older I get the more I learn about life. But I think there’s multiple factors that play into a person’s growth and upbringing that could affect wether or not they get into their own business ordeals. I do strongly believe that there’s a specific gene or trait (or something) already inside all people that grows stronger depending on different circumstances in life. I’ll leave it to scientists to better understand what those things are, because I have no fucking clue. Ultimately, the one ‘gene’ you truly have to have, is the ‘I don’t give a fuck’ to fail gene.

Jon: I actually truly believe that anyone can be a successful entrepreneur, so long that they never give up. Most failures are actually just learning experiences. The majority of startups that I’ve invested in and advised ended their journey when the founders simply “gave up.” Nothing is promised in life and if it were easy; then every one would do it. Most successful entrepreneurs I know would be the first to admit that they are not the smartest or most talented person in their organization; but they’re usually the one that took the initiative.

How important have other people (cofounders, S.Os, investors etc.) been to your success?

Josh: I’d say they’ve been extremely important. They say knowledge is power and the folks that have been-there done-that have much knowledge. And I feel it’s my duty to observe and soak up as much knowledge and wisdom from others as possible. It’s really the one certainty that you have as an entrepreneur….advice.

Jon: Extremely. Whether they’re an adviser, investor, cofounder, or early employee; I consider everyone I work with to be one of my “partners.” I certainly could not have achieved my successes on my own and this platform itself is proof in the pudding. We’ve become a resource for other (CBD) entrepreneurs to accomplish their own goals while helping us accomplish our own.

Tell us where the idea for CBDEE came from be and how you plan to disrupt the CBD space.

Josh: It was mostly Jon’s idea to start. I think we’ve morphed it into different reals and broader opportunities. I think after we got together, we were both ‘all in’ on the concept of creating the ‘Amazon for CBD’. And we actually believe we have the ability to do so. I think disruption is a tricky word. We’re not really trying to reinvent the wheel, but just make it go a little faster. So pulling from the great ideas and brands already out there (not in this space necessarily) to utilize their great ideas and hopefully make them coincide with what we’re trying to accomplish with CBDEE. Culture is extremely important, no matter what industry you’re in. So, it’s very important that we hold brands and ourselves accountable to the things that we put forth and say we’re doing and what we’re about. Educating the consumer is probably the most important thing we can do at this juncture and the more consistent we are with the type of content we put out plus holding brands to do the same will allow us to slowly but surely be the most trusted place consumers can come to when need validation or clarification on a CBD product.

Jon: At Colab we’ve been very intrigued by the Cannabis space for quite some time now, but have largely ignored it because we were waiting for it to reach a certain level of “maturity,” for lack of a better word. As CBD emerged we saw a lot of brands associating themselves with Health and Wellness more so than recreation; even though we’re interested in both areas, we felt the business owners taking this approach with CBD would be more prone to follow all the latest compliance and legislation; and we were right. We started exploring CBD by consulting to a few brands (some of which are now selling on our platform) to try and understand their own challenges.

It became very apparent, very quickly, that marketing is by far what these brands need help with more than anything else. Especially digitally. So we launched CBDEE as a place of credibility at first. A place where brands can showcase their products next to others in attempt to provide credibility and gain the trust of each other’s customers. However, as the brand owners started to see some of the things we were doing to market ourselves; they wanted in. So we since then have developed an extensive menu of marketing services for brands to purchase as our offerings match their own marketing initiatives. The response has almost been overwhelming and we’re finding more great opportunities to share as cobranded, benefiting all of us.

Given that we’re not only doing a great service to the consumers by curating the best products, the superior services that we’re offering to the brands should be what sets us apart from the rest.

What has been the biggest barrier to your success with CBDEE?

Josh: I think we’d both agree that there’s already a stigma that’s teetering within the industry that could go either way. It’s mostly because brands are not complying with what they’re saying they’re doing and with now supervision at the moment like the FDA it’s kind of a free for all. This is why it’s so important for us to maintain the highest level of integrity with holding all our brands to the highest standards.

Jon: Processing! As people may or may not know, getting processing for credit cards to purchase CBD online is not any easy feat. Many of the companies that are supporting it are new themselves and still ironing out the kinks. Square now has a beta program that once opened should really help with making it easier to launch sites that sell CBD. But this was something that usually takes us 24-48 hours to get for any of our other businesses; for CBDEE it took close to 3 months to find the right partners.

How far do you look down the road when thinking about CBDEE?

Josh: For me, as an entrepreneur (dreamer) you can always catch yourself thinking about the ‘what if’ scenarios. And I think that’s fine, but just don’t do it for longer than a few seconds. I quickly bring myself back to reality and understanding that this is a long game and you can’t get ahead of yourself, no matter what. As every entrepreneur knows, it’s not a done deal until it’s a signed deal.

Jon: We are going to be “THE Amazon for CBD.” That’s an incredibly ambitious goal and target. We very quickly have been able to become the largest online CBD Marketplace, but we have a long way to go before we’ve accomplished what we set out to do.

Can you tell us a little about what is next for the brand?

Josh: Yes, we’re actually adding a hospitality arm to the brand and will be launching in hotels soon along with have CBDEE vending machines in specific locations. We’ll also be launching CBDEE 2.0 in the next week, which will allow all the brands to have access to their own dashboard which will make The on-boarding process simpler and give them access to much desired analytical information.

Jon: We’re expanding to offline, without opening storefronts. Through partnerships with various hospitality businesses we are creating distribution opportunities for our brands to be on shelves and in stores they would have not been otherwisee.

Finally, what is the most actionable piece of advice you would give someone trying to get into any entrepreneurial endeavor?

Josh: Once you have your concept, run it by close friends and family, as they will be the ones with the most honest feedback. If still feasible, then create action items/steps on what’s needed to create the idea. Set attainable small goals and look to hit them. Stay calm! Having dreams of creating a business is one thing but trying to execute that is a whole different ballgame. You must be ready to go on a roller coaster ride, as every day is full of ups and downs, so be prepared for that. Last but not least, get a few folks that you trust and are good at business (specifically things that you’re not so good at) and give them a piece to help you steer this journey. It’s never easy, but having smart folks in your corner goes a long way.

Jon: Do it! No one’s going to do it for you, so you might as well get started; and just keep going until you succeed.

Click here to check out everything that CBDEE has to offer.