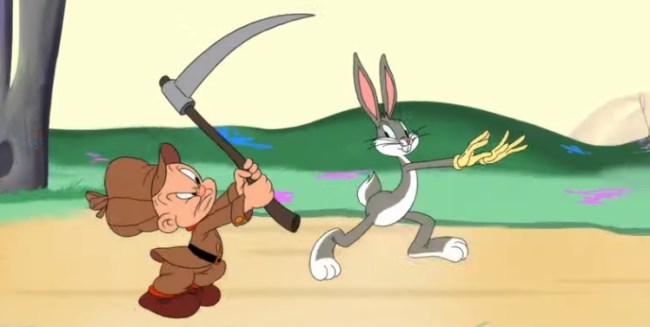 Elmer Fudd is going to have to find a new way to hunt Bugs Bunny.

The new “Looney Tunes Cartoons” reboot which premiered last week on the streaming service HBO Max will no longer feature guns in response to US gun violence according to executive producer Peter Browngardt who spoke to the NY Times last week.

The old “Looney Tunes” violence is here, too: the sticks of dynamite, the intricate booby traps, the anvils and bank safes dropped on unsuspecting heads.

“We’re not doing guns,” Browngardt said. “But we can do cartoony violence — TNT, the Acme stuff. All that was kind of grandfathered in.”

In the short preview clip posted by HBO on Youtube, Fudd’s rifle was replaced by a scythe.

People didn’t seem happy about HBO’s decision to take away Elmer’s rifle and voiced their displeasure on Twitter.

Taking a gun away from Elmer Fudd is like taking spinach away from Popeye. https://t.co/4UyIYSZVEC

YOU HAD ONE JOB WARNER BROS.

YOU HAD ONE FUCKING JOB. pic.twitter.com/LZpH475eCd

Then what's the fucking point?!https://t.co/4dtl5nbk6A

@jasonkilar this is really fucking dumb. I mean Elmer Fudd is a Hunter who is trying to kill Bugs. Are you gonna remove Yosemite Sam’s pistols too? Leave being politically correct to Disney. https://t.co/gAoOSFDlRC