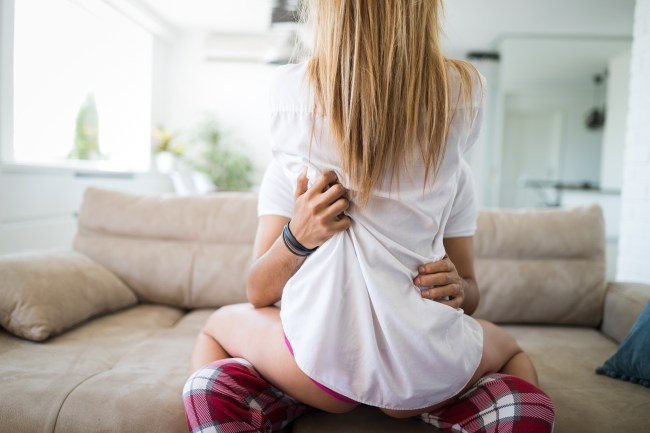 Sex. We’ve all done it, smelled it, etc. Sometimes it’s scary. When you were 17, and the condom broke, and Mr. and Mrs. Hannigan were right upstairs with no idea that their daughter was building grandchild #1? Scary!

But then you grow up, have it a few more times, and realize “hey this isn’t scary, it’s boring!” That’s been the last four-five years, excepting that one time I had it on a lifeguard stand and I wasn’t even CPR-certified! I’ve lied on my resumé before, but that’s reckless.

Sex has never been scarier than it is today. As couples quarantine together, the typical rhythms of intimacy have been disrupted by clanging reality checks: what if we get a rash, or pregnant? Dermatologists and OBGYNs have their hands completely full right now. Some couples are even wondering… can we still knock boots?

If you follow these simple guidelines, there is no reason you have to stop piping:

1. No more spitting in each other’s mouths

This one hurts. If you’re new to sex, you probably haven’t ventured into the raunchy waters of momma bird-baby bird degradation. But for those of us who have been monogamous for over six weeks, the old spit swap is an incredibly reliable tool for reminding your partner just how much they disgust you. For now, use your words instead of your expectorate. Telling someone “you’re my urinal sponge” conveys a similar message.

We can’t be wasting toilet paper or paper towels right now. Let it crust, then pick it off with a nail.

Following the New York/New Jersey ban on gatherings of 50+ people, this one is purely a legal issue. But aside from the criminality of having a 51-person bangerooski, it’s just inconvenient. The number of air-mattresses and sofas required? You’ll be hunting in the home gym for exercise balls and yoga mats. Keep it intimate, less than 10 tag teams. With luck, we’ll be back to Royal Rumble status come June.

There was a time when shower sex was considered the steamiest of all sexes. Then someone realized that high-pressure water was a corrosive ingredient that washed away all the natural, probiotic juices. This led to squeegee sounds, like a windshield wiper dragging across a dry windshield. Next thing you know, couples were showering together for mutual back-washing but leaving sex for dryer climates. Bring it back. If you can’t get past some squeegee sounds right now, you’re probably quarantining with the wrong person.

Hair was on the way back. Then the CDC said beards are weird, or maybe that was Machine Gun Kelly. In any case, if you’re not allowed to have fur on your face, what makes you think it’s safe to have it on your grundle? Rip it off. Dong shag and vag pelts trap germs like velcro traps lint. Flatten the curve and smooth the stubble.

Lastly, make sure you and your partner respect each other. A crowded 1-bedroom is no excuse for inappropriate touching. Or something. Happy boning!