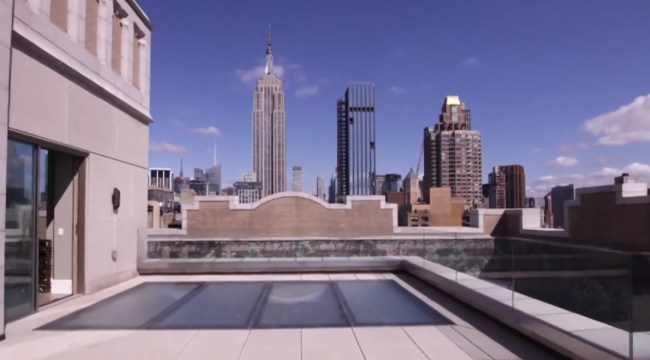 Jeff Bezos is the richest person in the world with a net worth of $144.6 billion. So that means that the Amazon CEO isn’t forced to by some fixer-upper ranch in the suburbs of Terre Haute, Indiana. Jeff Bezos can afford a place in the Big Apple, and not just any old slum in New York City, an exquisite palace in the sky.

Bezos recently purchased a penthouse comprised of three different apartments in NYC that has an estimated price of $80 million. The three units have 17,000 square feet and 12 bedrooms. The penthouse home for the billionaire is at 212 Fifth Avenue, overlooks Madison Square Park and has scenic views of the Empire State Building as well as the One World Trade Center.

The three-floor home in Manhattan’s NoMad neighborhood features a private elevator, large terraces, “floors of solid oak and marble, a custom kitchen with Ash mill-work, marble counters and top-of-the-line Gaggenau appliances, and bathroom finishes that include honed, polished and fluted marble and hand-dyed sycamore cabinetry” according to the listing on StreetEasy.

One would expect that a man who recently gave up at least $36 billion in a divorce to his ex-wife MacKenzie Bezos, would lay low with spending money for a little while, but here’s Bezos dropping $80 million on a Manhattan bachelor pad.

The 10,079-square-foot penthouse is named “The Crown,” and it alone has five bedrooms, three “powder rooms,” floor, a private elevator, and multiple terraces. The penthouse offers plenty of outside space with incredible views of the New York City skyline. The third floor features even more outdoor room for entertainment and great views of the cityscape. The penthouse was recently listed at $58 million by itself without the other two floors below it. The 24-floor apartment building offers a fitness center, a golf simulator, a game room, and a movie theater. Take a video tour of the luxurious NYC abode.

There have been reports that Bezos had been looking for a swanky new NYC home “for months” before snatching up this unit. This was the second-most expensive real estate deal in New York City this year, the only other being the $238 million property at 220 Central Park South purchased by hedge fund billionaire Ken Griffin.