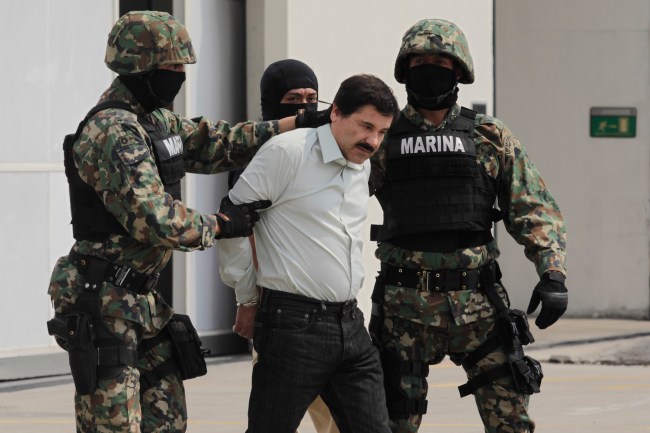 The Mexican government found out that the real estate market for properties formerly owned by Sinaloa Cartel boss Joaquin “El Chapo” Guzman is not as strong as they had hoped. Mexico listed homes that were owned by El Chapo and confiscated by the government, but was only able to sell three for disappointing sale prices.

Mexico sells three of El Chapo's homes for $227,960 at auction https://t.co/nLD5W2ZYLN via @MailOnline

Two of the homes sold for $64,589 and $55,725 at the auction on Sunday in Mexico City. One of the houses sold for $107,530, and it was the safe house with a steel-enforced front door that El Chapo was holed up when he was one the lam after his first prison escape in 2001. Mexican military police raided the home in February 2014, but Guzman was able to escape through underground tunnels underneath the hideout that he accessed the tunnel hidden under a bathtub. Guzman emerged out of the tunnel through a drainage system manhole.

For those interested in real estate speculation in Mexico, don’t fret because three of El Chapo’s homes did not sell during the auction. Weird. I can’t imagine why people wouldn’t want to buy the home of the Sinaloa Cartel kingpin who had thousands of people murdered and his crime syndicate still controls massive swaths of Mexico. Such as when the Sinaloa Cartel overpowered the Mexican military to force them to free El Chapo’s son Ovidio Guzman Lopez after they had captured him.

The most expensive of El Chapo’s houses did not sell and is valued at $587,000. El Chapo reportedly bought the three-story home residence for Griselda López, his mother of his son, Ovidio Guzmán López. The total estimated value of the homes is 19,430,000 Mexican pesos, or about $1,000,000.

The Administration of Property and Disposal Service is hosting the auction that features homes, vehicles, and other valuable items that were seized from some of Mexico’s most dangerous drug kingpins. The government was expecting to raise at least $1.8 million from the auction. The money from the house sales at the auction will be donated to support a children’s musical program in the southeastern state of Oaxaca.

El Chapo’s net worth was said to be $14 billion. On July 17, US District Judge Brian Cogan sentenced Guzman to life in prison, plus 30 years. The judge also ordered Guzman to forfeit $12.6 billion. With El Chapo’s empire crumbling and the U.S. and Mexican governments seizing the vast fortune of the Sinaloa Cartel leader, it may have caused El Chapo’s wife to get a job.