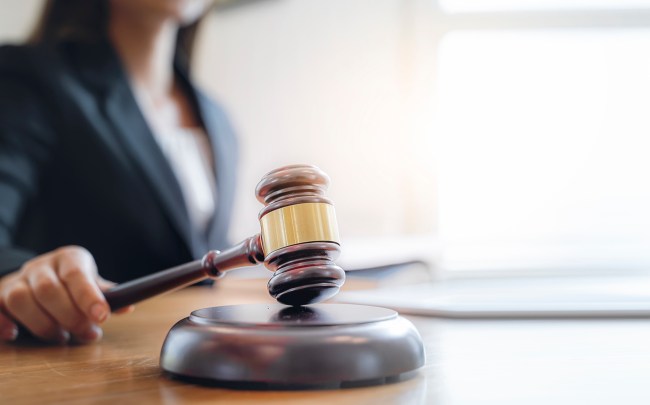 On Monday, Kenton County Judge Dawn Gentry was suspended by the Judicial Conduct Commission after shocking allegations were revealed. Judge Gentry was temporarily suspended with pay following claims of inappropriate workplace behavior that emerged in November.

In November 2018, Gentry reportedly hired her boyfriend Stephen Penrose, who was a former pastor and allegedly was not qualified for the court position. “You hired Stephen Penrose because you were engaged in a personal sexual relationship with him, not on the basis of merit,” the Judicial Conduct Commission said this week. The commission claimed that Gentry forced another employee to resign “to create a job opening for Mr. Penrose.” Penrose was and is still married to another woman.

Once Penrose was hired, Gentry allowed him to play guitar and sing in the office, which was “disrupting other court employees during the workday,” according to the court documents. Gentry also allowed employees to store alcohol in court offices, and they drank booze in the courthouse.

The couple had sex with the judge’s secretary, Laura Aubrey, according to Cincinnati.com. Getting screwed in court has taken on a whole new meaning.

“While serving as Family Court Judge for Kenton County—in particular, since being elected to that position in November 2018—you have engaged in a pattern of conduct that constitutes misconduct in office and violates the Code of Judicial Conduct,” the commission said in November.

RELATED: Couple File Lawsuit After They Were Kicked Off Cruise Ship For Having Loud Sex

Judge Gentry was charged with nine ethics violations in early December. Gentry was also accused of falsifying timesheets, dismissing attorneys who did not support on her bid for Kenton County Family Court judge, and coercing employees to contribute and work on her judicial election campaign, and bringing her children to work and allowing them to witness confidential court proceedings. On one occasion, her child recognized one of the children involved in a confidential case, according to committee accusations.

Judge Gentry earns approximately $136,900 a year working at the Kenton County Family Court, where she rules on cases including adoption, divorce, domestic violence, child support, and paternity cases. Gentry’s temporary suspension with pay is expected to last up to two months and faces disciplinary action. Gentry has denied most of the charges levied against her.