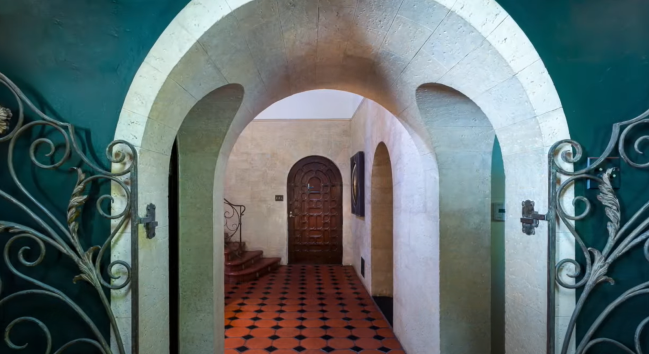 When you’re Leonardo DiCaprio you can afford to shell out $7.1 million for a house that you’ll never live in. Leonardo DiCaprio, who has a net worth of $260 million, got his mom a nice little belated Mother’s Day gift with a luxurious mansion situated in a quiet hillside enclave of Los Angeles that was featured in Architectural Digest.

DiCaprio treated his mother, Irmelin Indenbirken, to a 4,926-square-foot Spanish Colonial home built in 1928. DiCaprio bought the lavish home in Los Feliz for $100,000 over the $7 million asking price. Leo purchased the classic, yet renovated abode from Modern Family star Jesse Tyler Ferguson, who sold it for a $2.5 million profit from the original price he paid for it seven years earlier. Before Ferguson, the swanky dwelling was previously owned by celebrities Gwen Stefani and Robert Pattinson.

“You are welcomed by a 2 story formal entry, gorgeous library with soaring ceilings, stained glass windows and romantic balconies from the upstairs level looking down into the library and living room which boasts 25 ft ceilings and a beautiful stone fireplace,” the listing from Compass states.

“Almost every room has access to outdoor space, perfect for entertaining or al fresco dining,” the real estate listing says. “Additionally, there is a magnificent pool and spa, detached Zen/Meditation/Yoga room, full detached pool bathroom and newly renovated observation deck with views of the city including the Griffith Park Observatory.”

Leonardo doesn’t only buy real estate for his mom. The Hollywood actor purchased a $4.9 million mansion built in 1926, also in the Los Feliz area, for his father in 2018. This home was previously owned by Moby.

RELATED: Viral Chart Shows How Leonardo DiCaprio Refuses To Date A Woman Over 25

RELATED: Take A Video Tour Of $500 Million Bel-Air Mansion Known As ‘The One’ With Twice The Square Footage Of A Football Field