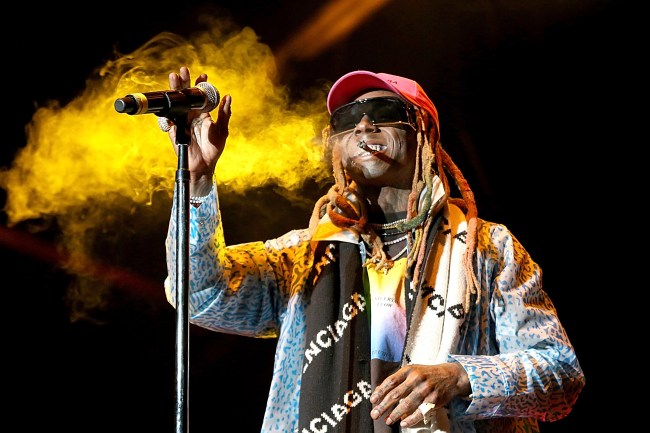 Lil Wayne aka Weezy F aka Lil Tunechi has been killing it in 2018. He settled his lawsuit with Birdman and Cash Money Records which paved the way for him to finally release Tha Carter V which led to a MASSIVE financial windfall for the Young Money rapper from NOLA.

After dropping The Carter V Lil Wayne killed it on the charts. The album debuted at #1 on the Billboard 200 and it had the second-highest streaming week ever for an album.

Lil Wayne’s treating himself after such a successful year and he’s just purchased a $17 million Allison Island, Miami mansion with a moat entrance. The house has 7 bedrooms and 10 bathrooms, 110-feet of water frontage and it measures 10,472 square feet according to Forbes. The pool area appears to float with water flowing in between blocks of concrete.

The walls are covered in suede. It’s got a SICK movie theater. This mansion is pretty much EXACTLY what I’d expect a successful rapper in Miami to be living in.

Check Out Photos of Lil Wayne’s New Miami Waterfront Mansion; Here’s How Much He Paid For It https://t.co/FRSnHS3O15 pic.twitter.com/m9dNoJSA1C

I can’t really imagine what life would be like in a place like this. You’re already in a neighborhood with security and on top of that, you’ve got this incredible security gate at your own house.

Lil Wayne’s net worth is said to be somewhere around $150 million so he can most certainly afford this $17 million mansion several times over. All he needs to do is go on tour and the man will be printing millions overnight. It’s great to see Weezy F back in the game and off the purp.

For more images of this house, you can click here to visit Forbes where they’ve got a full gallery, specs, and information about the architect.