The Lizzie Borden Murder House In Massachusetts Is On The Market 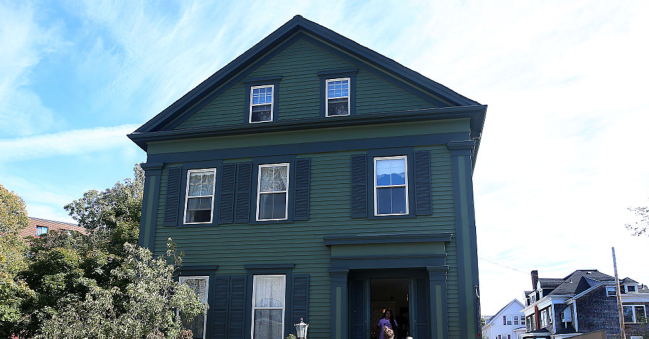 If you came across this house listing in Fall River, Mass. you’d probably think it was just another typical house in the area, because that’s exactly what it looks like. It’s got that charm and character that your significant other would ‘die’ over, but those feelings would probably fade fast after realizing the house is where Lizzie Borden’s family was murdered.

If that doesn’t creep you out or anything, the home can be yours for $2 million.

The listing at 230 2nd Street is well-known for being the creepiest place in Massachusetts and one of the scariest houses in the United States.

On August 4, 1892, Andrew Borden and his wife Abby were murdered by an ax while inside the house. Lizzie, the 32-year-old daughter of Andrew and stepdaughter of Abby, was suspected and tried, but was acquitted of the crime despite the judge admitting that she was “probably guilty.”

The judge determined she was probably guilty and should remain jailed until a Superior Court trial, according to Smithsonian Mag.

Neither the attorney general or the district attorney were ready to haul Lizzie into Superior Court, even though both believed she was guilty. There were holes in the police’s evidence, apparently.

Lizzie lived to be 66-years-old.

Given the fact that we’re all so intrigued with horror and murder stories like this, the home has been ‘The Lizzie Borden Bed and Breakfast Museum’ for many years now. It hosts tours of the property and features six bedrooms in which guests can actually spend the night. And yes, you can stay the night in the exact room Abby was murdered.

If the house alone isn’t intriguing enough, the buyer will also own the business and any trademarks and intellectual rights associated with it. You may never actually sleep in the house for being so freaked out, but hey, maybe you can make some cash along the way.

“Picture yourself serving fun hatchet cookies, tiny johnny cakes and a scrumptious breakfast to overnight guests who have just enjoyed an experience of a lifetime! Owner’s retirement is your gain!” the listing reads.

That’s not the way I would describe this surely haunted house, but hey, this real estate isn’t going to move itself.