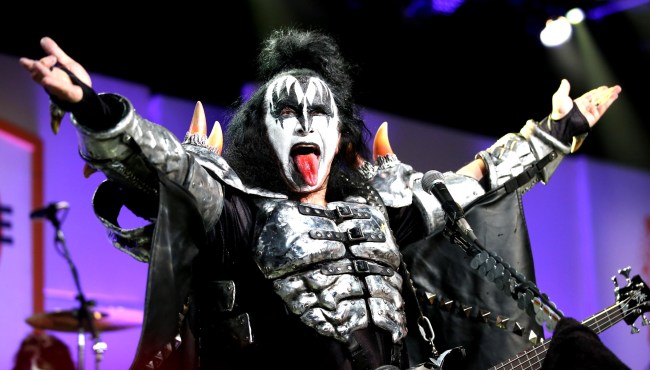 We’ve shared and looked inside some seriously large mansions over the past few years owned at various points by people like LeBron James, Tommy Hilfiger, The Weeknd, and Tom Brady.

Today we can add one more monstrous mansion to that list as legendary rocker Gene Simmons of KISS is selling his massive 16,000 square foot home in Beverly Hills for $22 million.

Let’s see what that kind of cash gets us when it comes to buying a home, shall we?

According to the mansion’s listing on Realtor.com…

Situated on ~2 acres on the coveted tennis court row of Benedict Canyon, lies this incredible one of a kind 16,000 square-foot mansion. This special property has a long list of owners that include some of Hollywood’s greatest. 7 bedrooms, 60 foot water slide, parking for 35 cars, professional size tennis court and 40 foot entry foyer, are just a few of the amazing features on the property.

I don’t know… do you think parking for 35 cars is enough?

The 71-year-old Simmons has apparently owned the place for 34 years, so there are bound to be a few hidden and/or forgotten goodies in there, right? I mean, this is Gene Simmons we’re talking about. Remember Gene Simmons Family Jewels on A&E?

Get this. He bought the place, located on what’s called “tennis court row,” way back in 1986 for just $1.34 million. $22 million would be a pretty good return on his investment.

The house also boasts 7.5 bathrooms, a tree-lined driveway, a pair of sweeping staircases, a domed 40-foot high foyer, and a living room with a three-story wall of windows and a mezzanine level that overlooks it.

It will only cost around $103,266 a month in mortgage payments, with a small $4.4 million down payment, of course.

What do you think? Should we buy it?

My first concert? This guy's band – and his home is on the market: https://t.co/THSGsfDddW #BrightMLS @InmanNews