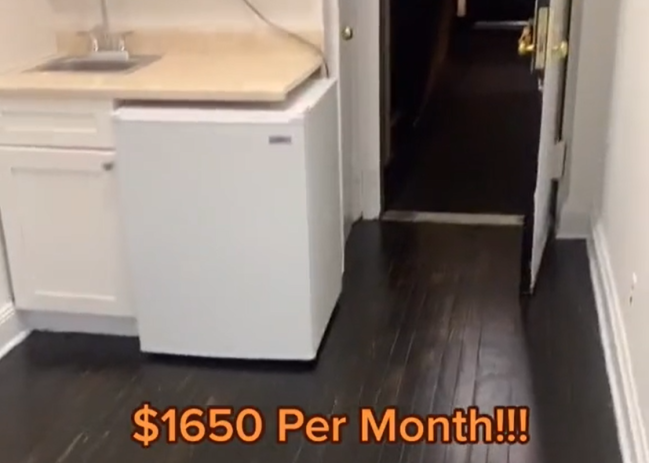 Because of the stringent coronavirus lockdown rules and the concerns about the population density in regards to the spread of COVID-19, there have been flocks of people deserting New York City. Approximately 3.57 million people left the NYC metropolitan region between Jan. 1 and Dec. 7 in 2020, according to Reuters. The mass migration has resulted in about $34 billion in lost income in the Big Apple.

A fine young gentleman who goes by the name of “New York City Realtor” on TikTok posts videos of homes and apartments on social media. He went viral this week for a video titled “Worst Apartment Ever NYC!!!”

“People ask me, what’s the worst apartment you’ve ever seen, I’m going to show you,” says realtor Cameron Knowlton in the viral video. “And before you ask, yes, this is a real apartment. This is what $1650 gets you in the most desirable neighborhood in New York City.”

The apartment in the West Village has a rent price tag of $1,650. Your dream home has one mini-fridge, but no oven, no freezer, and no stove. There is one closet in the tiny home. However, there is no bathroom or shower in the unit. You’ll have to venture out into the common areas when nature calls and hope that it isn’t already occupied. Better take it easy with the chalupas. You share a bathroom and shower with the rest of the building.

He is so unimpressed by the apartment that he tells his viewers to “Roast This Apartment in the Comments.”

In case you’re contemplating renting the $1,650 tiny apartment that shares a bathroom with the entire building, may we suggest that perhaps you investigate your other possibilities. Maybe you’ll enjoy the Gulf of Mexico views from this 7th-floor 3-bedroom unit in Destin, Florida for $1,650 a month. Or maybe you’ll go for this 3-bedroom beachfront condo in Orange Beach, Alabama for $1,650.