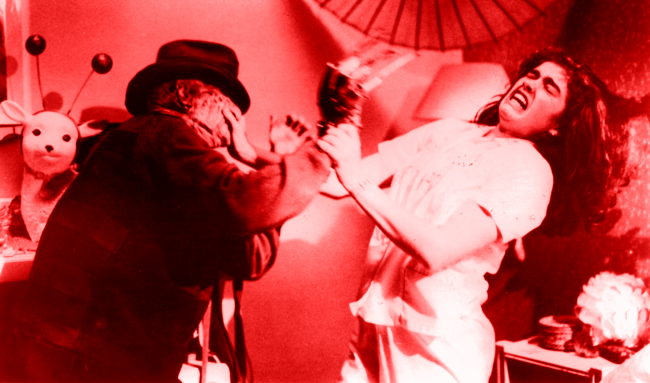 In the market for a spooky new home? Then have we got the place for you! How does living at 1428 Elm Street sound?

Okay, that’s not really the address, but if you were ever going to pretend it was, this home in the Spaulding Square neighborhood of Los Angeles would be the place to do it, because it actually IS the place.

The current owner of the home featured in Wes Craven’s classic 1984 horror film, Lorene Scafaria (the director of Hustlers), bought the place for $2.1 million in 2013. Now, she’s asking for $3.25 million, but only until midnight on Halloween. After that, who knows what happens? Freddy shows up to reclaim the place?

Sure, the front door is no longer painted red – an easy thing to remedy – but the rest of the exterior of the home still looks pretty much like it did in A Nightmare on Elm Street.

According to the home’s listing on Realtor.com, here’s what you get for your $3.25 mill.

1428 N Genesee is a beautiful Dutch Colonial with a modern twist. The 3-bedroom, 3.5-bathroom, 2-story main house has stunning walnut floors weaving through archways and past bright windows.

Highlights include an open, retro-modern kitchen, beautiful built-ins, a grand primary suite, bathrooms en suite to every bedroom, separate laundry room, and multiple work from home options. Patios, terraces, picture windows and countless French doors, maximize the use of the gorgeous grounds. Blue pool, green grass and fragrant citrus trees draw you out and make this an effortless example of the best of indoor-outdoor Southern California living.

The detached guest house is charm personified with its own pergola covered patio, kitchen and an additional designer-done bathroom. This elegant traditional was reimagined by an English designer in the mid-2000s, lovingly lived in by the current owner, and a location for some of Hollywood’s favorite films, commercials and print.

The home fictionally known as 1428 Elm St., which served as the façade for the protagonist’s house in “A Nightmare on Elm Street,” has come to market for $3.25 million. @jflem94 reports: https://t.co/VEgA3g9SSD

“The whole neighborhood gets the tour bus treatment. People always get tickled when they see it,” Heather T. Roy of Douglas Elliman, who holds the listing with Learka Bosnak, told the Los Angeles Times.

“The façade is iconic, but the ties to the movie stop as soon as you walk through the front door. Inside, it’s a beautiful traditional-style space with a modern twist,” said Bosnak.

Bosnak also added they will be handing out candy to trick-or-treaters there on Halloween.

“We all missed Halloween last year because of the pandemic, so this year is the Halloween comeback tour,” said Bosnak. “We have to celebrate.”

Here’s what the house looked like with the red door…

Interested in owning the Nightmare on Elm Street house? All it will run you is around $15,400 a month in mortgage payments, after a small $650,000 down payment, of course.