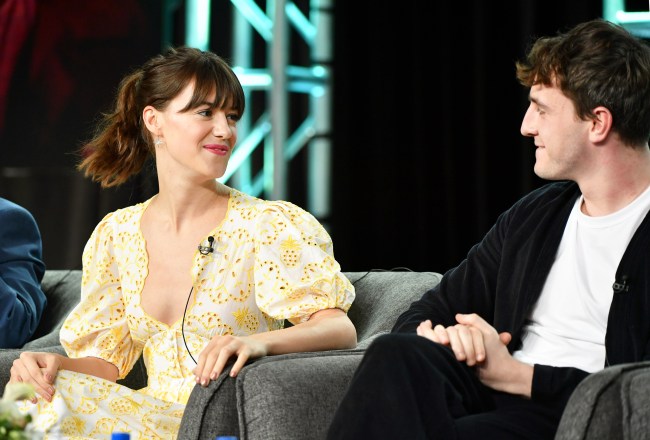 Do you think that the Cleveland Browns, through all their years of mediocrity, would ever throw on Patriots game film just to see how it was supposed to be done? Not even to prepare for a game against them; just so the coaches could illustrate the gulf in performance between Tom Brady and their own Brady Quinn/Colt McCoy/Brandon Weeden/Jason Campbell/Bryan Hoyer/Josh McCown/Johnny Football etc.? As in, “hey guys, this is what we mean when we talk about playing football. Believe it or not, these clips are of the same sport we’re playing. Not really sure how we get from where we are to this, but something to think about.”

That’s how it felt watching the first couple episodes of Normal People last night with my girlfriend. If you haven’t seen it, imagine a buffer, quieter Harry Potter gently boning a Hermione played by Anne Hathaway for 12 episodes. The show has been out for a while, but we’ve had other things to do—like watching I’ll Be Gone In The Dark, Jeffrey Epstein: Filthy Rich, Abducted in Plain Sight, etc. Just some lighthearted wind-down TV that helps us get in the mood… for abiding by the law? I don’t know, we love it. But it’s not exactly the sort of television that inspires gentle neck kisses.

Which is why Normal People was such a left turn for us. What a change of pace. From horrific, violent, cannibalistic sociopathy to the tenderest of nibbles, glances, and compliments. In a half hour episode of this show, there might be 50 words of dialogue. We have to watch it with subtitles because the Irish brogue is so charming that we don’t want to miss a word. But even reading this show gets us squirmy. Right from the get-go, too. No beating around the bush. Connell is ALL OVER Marianne from the moment they smooch, and it’s all feet and hands and eye contact so lustful that you forget these actors are playing high schoolers. I don’t think we took a sip of water for three straight episodes and we ALWAYS hydrate before bed.

The point is this: as I sat beside my lovely girlfriend, reading “*gentle moaning*” and “*bedsprings creaking*” (thanks for spelling out the noise, Hulu!), I couldn’t help but feel woefully, cripplingly inadequate. Here was a cracking reminder of that all-important sexual ingredient: passion. With Connell and Miriam, there wasn’t a trace of contrivance, of going-through-the-motions, of “let’s do this so we can take the chicken thighs out of the fridge and bring them to room temperature and still eat at a decent hour.” For the lovebirds on screen, it’s anytime, anyplace. The dusty ground abutting a haunted house is, for Miriam, just as good as a fresh bed at a Courtyard Marriott.

I am to blame. It’s my effort that has taken on a monochromatic hue. I’m not giving my lady much to work with. I talk about it on our podcast often, and it seems funny. But this show made me realize that it’s not funny at all—it’s pathetic. I am a pathetic, impotent loser.

I recognize that sex on a romantic TV show is always going to be heightened, if not unrealistic. The DP for this show deserves a knighthood. It’s all gentle focus and dappled lighting and closeup shots that make you feel like you’re having a threesome with the two leads. But even so, I couldn’t help but feel like I was watching a guy employ the same moves and grooves that I use, except with a FAR superior mastery of them; as though we studied from the same playbook but I closed it after the table of contents and said “I get it!” while he went through it with a highlighter, made flashcards, and had personal tutoring sessions from the author.

Either that or I’ll just cancel our Hulu subscription. Not sure I need to pay $50/month to remind us how bad I am at sex.