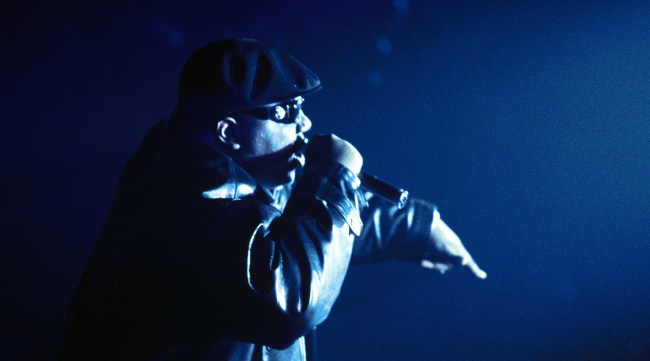 Christopher George Latore Wallace, best known by his stage names the Notorious B.I.G. and Biggie Smalls, was one of the greatest rappers of all time until his shocking death at the age of 24 in 1997.

At the time of his death, Biggie was living in the Fort Greene neighborhood of Brooklyn in New York. It was while living there with his wife, Faith Evans, and her daughter when he released the album “Ready to Die.”

Now, that home, located just one block away from Fort Greene Park, is up for sale with the price set at $1.7 million.

According to the home’s listing on Realtor.com, the 1,701 square foot apartment comes with two bedrooms, two bathrooms, and is “infused with design and history.”

In its oversized living and dining space, you will find soaring 12-foot ceilings, a large arched window, a wood-burning brick fireplace and large timber beams. The chef’s kitchen was truly made for those who love to cook or entertain, with a Bosch 5-burner stove top, Deep double sink, Glassos and Carrera countertops, as well as two stainless steel ovens. These elements are further complemented by deep storage and pantry space above. Tucked behind the kitchen and through an oversized antique barn door is the first bedroom that doubles as a library, with custom-milled cabinetry, shelving, and a built-in Murphy bed. Connected is a renovated full bathroom, large walk-in closet, and overhead storage.

The downstairs lower level features a large bedroom, home office, custom dressing room with built-in shelving and hanging racks as well as a large separate laundry room. The primary bathroom is a sanctuary from the city with both an oversized walk-in shower and freestanding deep soaking tub.

Additional architectural elements abound which include custom built shelving as well as exposed wooden beams in the ceiling.

The Feuchtwanger Stable (aka 159 Carlton Avenue) was built in a Romanesque Revival Style in 1888. This boutique condominium building has 12 units. Though the building has evolved with the neighborhood, it has been left with many of its original details, like the massive arched windows, creating a magical home environment in the heart of Fort Greene.

It is also located just a few blocks from the street that was named after Notorious B.I.G.

The corner of St. James Place and Fulton Street was renamed “Christopher Wallace Way” in June of 2019, site of the “one-room shack” he lived in growing up in Brooklyn.