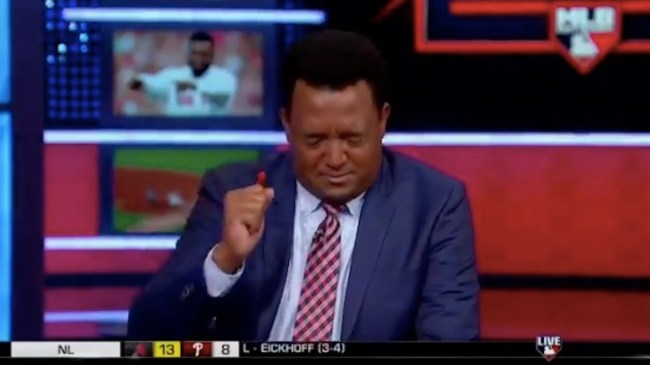 It doesn’t matter what team you root for or what part of the country you grew up in, odds are you were a fan of David “Big Papi” Ortiz.

Reminiscent of a gigantic home run-smashing Dominican teddy bear, Ortiz was the rare Hall of Fame player that transcended team loyalties and was universally liked and respected by all baseball fans.

So when news of his tragic Sunday night shooting spread across the states, Boston Red Sox fans weren’t the only ones devastated by the news, as baseball fans across the union began outpouring love and respect for Big Papi.

However, of all of those kind words and well wishes, the most emotional one came from Ortiz’s former teammate, Hall of Fame pitcher Pedro Martinez.

Martinez, who is a regular analyst for MLB Network, began speaking on the Ortiz shooting by saying that David is a “strong-hearted person” and is someone who that is “used to perseverance.”

“I’m hanging in there,” Pedro begins. “There is something I must say about David.”

“David has been a strong-hearted person and someone that’s used to perseverance. A great role model to society, to baseball. In general, as a human being, a great father. I don’t have enough words to describe who David is, what David means to baseball,” Martinez continues.

“But I’m so disappointed to know that someone like David, who saved some many lives, can have someone after his life,” Martinez says before he begins to cry.

Luckily, Ortiz was successfully operated on in the Dominican Republic before being transported by a Red Sox plane back to Boston, where he will continue his recovery.

While it is unclear whether or not Ortiz will require further surgery, Ortiz’s father Leo told ESPN that “doctors say that David is out of danger.”

And that, whether you’re a Red Sox fan, a Yankees fan, or just a generally decent human being, is excellent news.