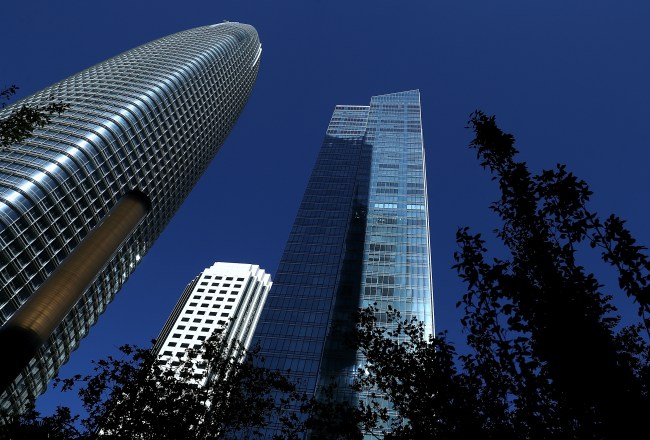 San Francisco’s Millennium Tower, one of the most-expensive, most luxurious residential buildings in the city, is titling more than two feet north and west. Among the well-to-do residents in the building are Joe Montana and Hunter Pence.

Located on the corner of Fremont and Mission Streets in the Golden City’s financial district, the Millennium Tower stands 645 feet tall. It has 58 stories and is the tallest residential building in San Francisco.

However, it is sinking. Fast.

According to Architectural Digest, the building continues to title at a rate of three inches a year because it is literally sinking into the ground. It has already sunk between 17 and 18 inches.

In San Francisco, on the corner of Fremont and Mission stands the now famous Millenium Tower. Sources say that this building has tilted more than 22 inches. Therefore, this work is being done here to correct it. pic.twitter.com/jfkC8LK5e1

Should the problem go unfixed, it could eventually reach a tilt of 40 inches. At that point, the elevators and plumbing would cease to work.

And according to both Architectural Digest and an investigative report from NBC Bay Area, part of the problem is actually work that was done to try and fix the problem last year:

“In a contradiction that defies improbability, data shows that around 10 inches of the overall 26-inch tilt happened last year following work to stop the sinking. NBC Bay Area revealed that drilling logs show a gap of one to four days between drilling and grout installation. In the article, the NBC Bay Area stated, ‘While Millennium fix officials discounted the issue to authorities, some outside experts say such delays in grouting could very well explain the comparatively rapid settlement and tilting that occurred during pile installation in August.'”

To try and re-fix the sinking and tilting, work is currently being done. 10 steel pipes are being installed to bedrock some 250 feet underneath the tower.

If it is done correctly this time, it would halt and potentially reverse some of the tilting. As of right now, it remains safe.

But if the problem is not fixed quickly and properly, it could be a different story.