The 7 Characters You’ll Find At Every Topgolf 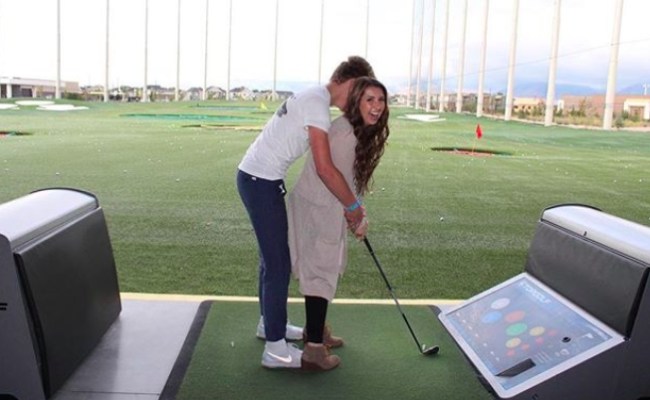 Topgolf is a destination that has attracted all walks of life due to its versatile offerings–a futuristic entertainment venue with food, drinks, music and HDTVs that play various sports games. It has something for everybody and if you find it doesn’t have anything for you, you’re a nobody. Or at least nobody I’d want to associate with. Don’t take it personally, bro. I’m no prize. Just ask my dad.

But I do like fun, which is why I’ve frequented Topgolf since it’s blown up here in the states. I’ve spent so many hours in the climate-controlled hitting bays, I’ve nailed down the profiles of 7 characters who you’ll almost always find in one of Topgolf’s 50+ locations. Tell me I’m wrong.

Who’s that who just strutted in with his own personal caddy? Wait, did he bring his own boom box to blast Danger Zone as he blows kisses to every woman he passes en route to his bay? Is he wearing….yep, that’s a green jacket.

It’s gotta be Tiger. No, it’s Phil. Never mind, it’s just your friend Travis, who played two years of JV golf and thinks Topgolf should pay him for appearances. The only thing bigger than Travis’ ego is his 3-wood head, which he won’t stop reminding you is made from a special titanium mined from Mars and won’t become mainstream until 2038. Just don’t ask him to try it out unless you want some smug answer like “Babies shouldn’t play with guns” as he puts back on his bean bag chair of a club cover and spits in your face.

Oh, and if you’re sentenced to follow Mr. PGA in the golf rotation, just know that you have time to drink a Big Beer at the Topgolf bar, take a leak, and get your license renewed at the DMV in the time it takes him to finish holding his follow through.

Quite possibly the only Topgolf character more insufferable than Mr. PGA Tour has got to be Mr. Excuses. Mr. Excuses has all of the justifications with none of the skillset. There is no depth this dude won’t go to cover up his utter ineptitude on the course. Dribbled a weak grounder before the nearest target? Oh, he’s just getting acquainted with his new clubs. Skulled it off the bay divider again? Someone burped in his back swing. Finished dead last? He just broke up with his girlfriend in 2015 and his head just wasn’t in it.

If Mr. Excuses spent a quarter of the time working on his game as he does justifying it, maybe the rest of us wouldn’t have to tell Topgolf to turn up the music to drown him out.

Droves of women in matching “Bride Tribe” tank tops descend upon their bay, their collective high heels slapping against the ground like Kentucky Derby stallions racing on a marble floor. In the words of the great Shooter McGavin, “How am I supposed to chip with that going on, Doug?”

You sit down, sip your beer, and watch the spectacle. The bride-to-be wearing a veil, holding the golf club like an umbrella. The dudes in the adjacent bays straining muscles trying to hit it over the fence in a flex that goes unnoticed.

After you swallow your last sip of beer, you raise your glass in their direction as to say “Don’t apologize for partying.”

One of the many lovely attributes of Topgolf is its new Bay Share feature, which allows groups of four or less to share a bay on Friday and Saturday nights with another group for just $20 a person for 2 hours of play. Bay Share is an awesome way to reduce your wait during popular venue times, as well as bring people together to enhance the experience.

You could conceivably meet your husband or wife in the bay, but you’re more likely to be paired up with the Old Timer. The Old Timer is a man or woman who was born pre-Eisenhower administration and finds fulfillment in the simple joy of swinging a golf club. You won’t find the Old Timer nestled up to the Topgolf bar or his eyes glued to a pivotal moment of a game on television, you’ll find him lounging in his bay in between swings working through a crossword puzzle like he’s got nothing else to do that day. He’s willing to impart lessons of a life well lived to the golfers in his bay, but only upon request.

“Ok, Bruno. For the last time, you don’t get points for how hard you swing in your practice cut. This isn’t a festival game, you’re not holding a sledgehammer, no bell is going to ring, and you won’t win a stuffed animal to use as a punching bag. Aim for the pin on one of those 11 giant dartboard-like targets and the microchipped balls will score themselves because counting is hard for some.”

“Me eating the celery that came with the order of wings doesn’t make me less of a man, Bruno. Don’t project on me just because your mom put motor oil in your bottle as a baby.”

“Bruno, please put your shirt back on and stop banging your chest, you’re scaring the children.”

Topgolf has become a top destination for bachelor parties because of it allows big groups to play competitive games in climate-controlled hitting bays while eating, boozing, and watching sports games on several HDTVs throughout. Nearly every bachelor party contains a Bruno–the guy who feels perpetually compelled to out-testosterone the rest of the group. All brute, zero finesse. The guy who’s never played a round of golf because the game doesn’t require you to try to physically dismember your opponent.

Oh Bruno, we hate that we love you.

The closest The Glutton’s been to swinging a golf club is when someone tries to cop a bite of his Mega Burger. Which, for the record, is 40 ounces of Certified Angus Beef, and should not be consumed by just one human. But The Glutton is no mere mortal, he is a transcendent entity that has no interest outside the consumption of delicious food–Brontosaurus ribs, boneless wings, bone-in wings, loaded waffle fries, hell I think I saw him trying to swallow a golf ball after he mistook it for a doughnut hole. Be careful, though. You may need to carry The Glutton out of Topgolf bay like the Jordan flu game, so make sure you have enough manpower.

As a man who’s currently entrenched in a multi-year relationship, a first date is as obvious to spot than clusters of hair in the shower drain. (Am I the only one dating Chewbacca?) One of the few dates my lady and I can agree on is a trip to Topgolf. I can drink as much delicious draft beer as I please while blowing off some steam by crushing balls, and she can drink beverages garnished with olives and celery in the fresh air while quietly resenting me for forgetting our 28 month anniversary. It’s all great fun, but I can guarantee you no one is mistaking us for a “first date” couple.

When the first date couple isn’t taking selfies, deleting them, and then taking more, they are engaged in what I dub ‘The Golf Grind.’ You know it, the man stands behind his date, both with a slight bend of the knees, four hands gripping one club, him instructing her with mechanically-flawed golf techniques, and her just hoping he stops breathing so heavily on her neck. Both of them are dressed like they were plucked from prom, reeking like the manufactured scent of a Sephora with the inescapable natural aroma of young love.

Ah, If I could only turn the clocks back to day one, I would have never missed all those anniversaries.

If I’m missing any, don’t hesitate to berate me in the comment section.