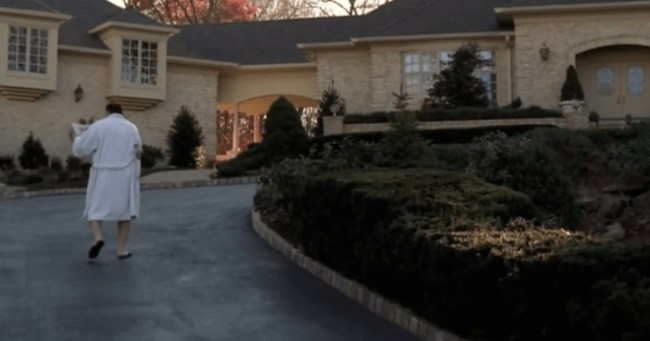 Do you want to live like Tony Soprano? While you might not be able to be a crime boss like Tony, you can literally live like Tony by buying his house from The Sopranos.

You can buy Tony Soprano’s house from the HBO show but it will cost you. The house from The Sopranos house has a starting price of $3.4 million. *White robe not included for retrieving the newspaper

The Sopranos house is located in North Caldwell of northwestern New Jersey, and is priced much higher than comparable houses in the area that range from $1.5 million to $2 million. Real estate site and app Zillow estimates the home’s value at $1.63 million.

The owners have said that there is an “intrinsic” value of owning Tony Soprano’s fictional home. Whether that “intrinsic” value is double the actual price will depend on whether a Sopranos fan gets involved in the sale of the home.

The 5,600-square-foot house of the Sopranos was built in 1987 has four bedrooms, four bathrooms, four garages and a detached guest house on the 1.5-acre property. Make sure you’ve got checks coming in because the property taxes are a whopping $34,005 a year.

They do not specify if ducks are included with the pool, but if you break the bread they might come.

The mob boss McMansion was listed by the current owners, Patti and Victor Recchia, who said that they don’t need that much space any longer after their son moved out.

The hit HBO TV show was filmed at the house between as many as 50 times, including the show’s pilot episode. The interior of the house was actually filmed in a home in Queens that was made as a replica of the Caldwell home.

Does it come with a birder feeder and is there $40 grand in there?

The house has since become a tourist hot spot. “I was pulling out of the driveway and I noticed a few fellas on their motorcycles coming down the cul-de-sac,” said Patti. “So I open my car window just to acknowledge them, and they say, ‘Hi, Mrs. Soprano! We’re not going to mess anything up, just want to take a couple photos.’”

When James Gandolfini died in 2013, fans left flowers, candles and dried ziti near the home’s curb.

You have until June 21st to make good with the cash, so go do the rounds and collect some checks. Wise guys who are “qualified buyers” can submit offers with “proof of funds” to sopranoshouseforsale@gmail.com. You see more photos and information on the Sopranos house HERE.

Let’s hope the house negotiations go better than this.