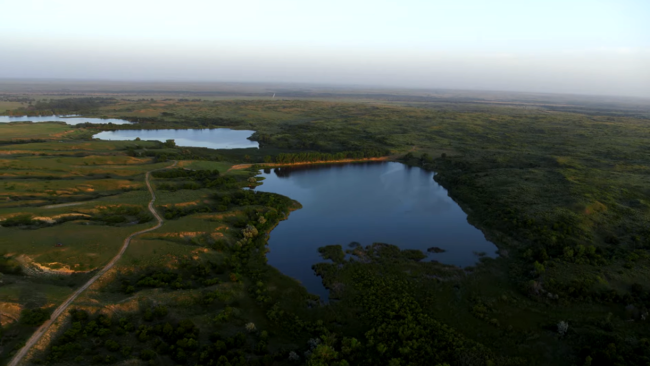 One of the largest landmark cattle ranches in the state of Texas, the Turkey Track Ranch, is going on the market and the sale price for the almost 80,000 acres that run along 26 or so miles of the Canadian River is expected to reach around $200 million.

According to the Dallas Morning News, the Turkey Track Ranch was founded in the 1870s and was one of the first large ranches in the Texas Panhandle.

It’s so big that the ranch actually spreads out into two different counties: Hansford and Hutchinson.

Owned by the Coble and Whittenburg families for more than a century, the Turkey Track Ranch will be put on the market later this year.

“It is with careful consideration and great emotion that we announce that, after 120 years of stewardship by our family, we have decided to sell our historic Turkey Track Ranch in the Texas Panhandle,” the families said in a statement. “For over a century this American landmark has been an integral element of our heritage.

“Generations of Cobles and Whittenburgs have created lifetimes of memories on the Turkey Track. Due to our family’s increasing numbers and geographical distances, we recognize that it is time to find a new steward for this historic holding.”

The Turkey Track Ranch is not only gigantic, it is also a historic site as the Battles of the Adobe Walls were fought there between U.S. soldiers and Native Americans in 1864 and 1874. Two monuments dedicated to those who participated in the battles remain standing on a six acre plot of preserved land, reports the Fort Worth Star-Telegram.

“This ranch is not famous for being famous, but for being private,” Icon Global founder Bernard Uechtritz said in a statement. “Its natural resources and position in history are unparalleled by anything recently sold or on the market and it’s truly a one of one.”

“If you look at the dynasty of great West Texas ranches, Turkey Track is the last one to come to market,” Uechtritz added.

“They are not making any more of these legacy ranches. These ranches have been the backbone of Texas for so long.”

Coincidentally, an even larger Texas ranch, the 266,000 acre 6666 Ranch is also currently on the market with the original asking price being over $340 million.

Neither of those properties, however, are the most expensive plots of real estate currently available in the state of Texas.

A much, much smaller piece of property, 5,535 acres, currently listed on Realtor.com has an asking price of $448 MILLION.

In case you’re wondering, the monthly mortgage payment for that property is somewhere in the neighborhood of $2,120,600 a month (after an $89.6 million down payment). It’s a really good neighborhood apparently.