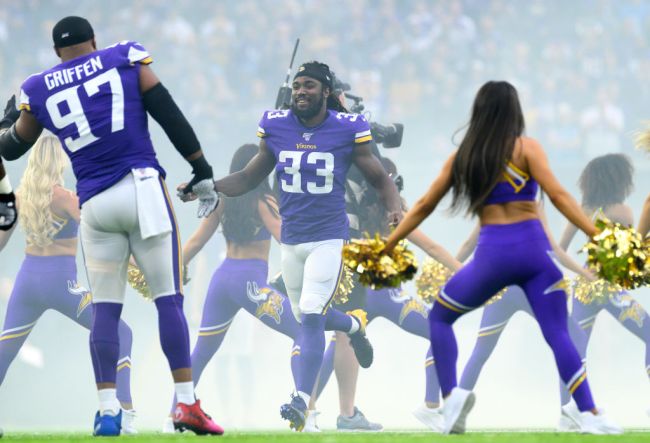 Dalvin Cook says he doesn’t know why Everson Griffen mentioned his name in a troubling video posted on Instagram.

On Wednesday morning, Griffen uploaded a video of himself holding a gun, claiming people were trying to kill him. In the video, Griffen says Cook helped him purchase the gun.

There is great concern for the well being of Everson Griffen, who posted a frightening video overnight of him wielding a handgun and also put this on Instagram … pic.twitter.com/aUatiAJYiG

“I’m in my house. N—– trying to pop me,” “I’ve still got clips left. This is my gun, .45 Wilson Combat, registered to me. I bought all my bullets around town. Dalvin Cook helped me purchase this gun. It all belongs to me, and they are registered to me. I know exactly where I bought them. I’ve got the card I have them on. I have everything.”

According to police Griffen fired the gun after believing there was an intruder in his home. The police have found no evidence of an intruder and had trouble getting Griffen to come out of his residence.

The Minnetrista Public Safety Department said in a news release that Griffen called 911 after 3 a.m. Wednesday from his residence. He said someone was inside his home and requested assistance from authorities. Griffen also told the 911 dispatcher that he fired a weapon but that no one was injured.

According to the news release, law enforcement and Vikings team psychologists have been in communication with Griffen since approximately 7 a.m. but Griffen has refused to come out of his residence. Police said they could not find an intruder at Griffen’s residence.

During his media availability, Cook was asked if he knew why Griffen mentioned his name and said he had helped him purchase a gun.

Reporter: "Dalvin do you know why he would mention you in that video he posted?"

Update: Police were finally able to get Griffen to come out of his home “without incident” and is currently being taken care of.

Vikings DE Everson Griffen, who had refused to come out of his residence since Wednesday morning, exited his home “without incident and is now getting the care that he needs,” according to the team. https://t.co/yVCZgQrgJB