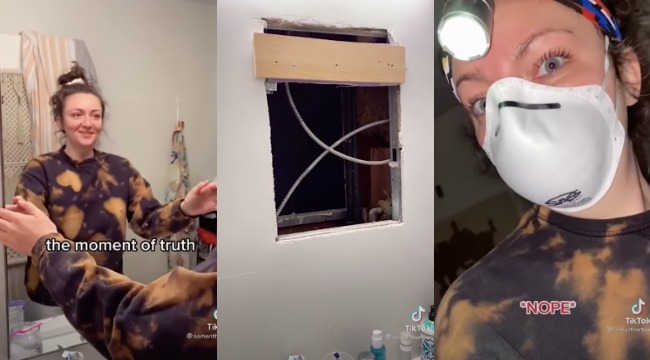 You won’t hear me arguing against New York City being the best city in America, but my God, what a racket they have going with the housing market.

If you have a wall that connects to your ceiling and wasn’t just slapped together by a money-hungry landlord looking to make a 650-square-foot two bedroom into a three, congratulations, you’re Jeff Bezos.

Expect the unexpected when it comes to New York City apartments, and more proof of that came by way of this viral TikTok series from NYC resident Samantha Hartsoe, who found what looks to be a damn torture chamber behind her bathroom mirror.

WHAT THE ENTIRE FUCK pic.twitter.com/J4UdHAWCIz

“Curiosity killed the cat, curiosity is going to kill me,” Hartsoe told NBC New York. “I can’t not know what’s on the other side of my bathroom.”

“My roommates definitely thought I was going to be dead. When I came back they were excited.

“I think everybody in New York has such small apartments, you don’t know what you’re going to find and everyone’s hoping for more space,” Hartsoe said.

In two weeks that haunted house will rent for $3,000 a month. Book it.