The 5 Craziest Ways Someone Has Ever Paid For College 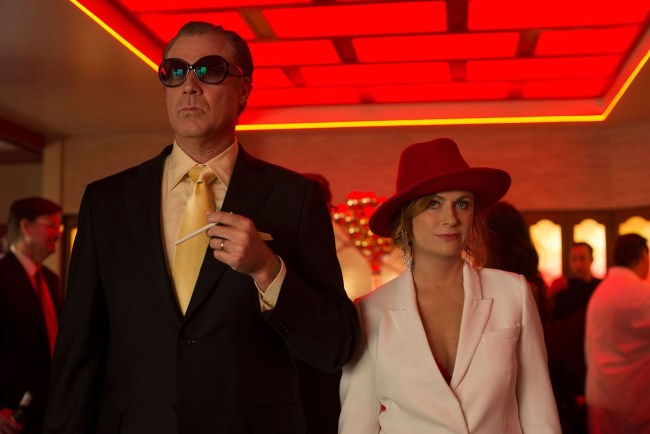 Unless you did something horribly wrong (or majored in premed), you probably view your time in college as the best years of your life. It’s a time when “no regrets” can actually be a guiding philosophy as opposed to a tired cliche— at  least until you graduate and realize you probably should have saved some of your money instead of spending it all on beer with “ICE” on the can and bottom shelf vodka with a generic Russian name.
It’s not exactly a secret that the cost of college has gotten out of control; those in the graduating class of 2016 faced an average of $37,000 in student loan debt. As a result, many people have been forced to think outside of the box for ways to minimize the amount they owe, and as you’ll soon see, a select few have actually done.

Will Ferrell and Amy Poheler’s new comedy, The House, is a hilarious take on a suburban family’s struggle to pay for the daughter’s education. In honor of it hitting theaters nationwide, we’ve put together a list of the craziest ways people have ever had to pay for college.

In 2011, Eric Dahl decided he wanted a free meal. Most college students in a similar situation would solve this problem by finding a lecture luring people in with the promise of cold cut sandwiches, stale cookies and unnecessarily tiny bottles of water, but Eric wasn’t going to settle for dining hall catering. He had his sights set on something bigger. Much bigger.

The University of Wisconsin student walked into a cheesesteak joint in Madison that offered a gratis meal to anyone who could finish a three-foot-long sandwich in under ten minutes. Five minutes and 52 seconds later, Eric stood up from the table with a full stomach and a new destiny: to become the greatest competitive eater Madison, Wisconsin had ever seen.

The 6’ 3”, 220-pound Eric was soon dubbed “Silo”— a name typically reserved for the token fat kid in movies that take place in a frat house. He went on to win dozens of eating competitions, and as of 2013 he’d pocketed almost $20,000 in prize money. At one point, he was the top-ranked member of the National Collegiate Competitive Eating Association, an organization that apparently exists and which thankfully has a dramatically different position on amateurism than the NCAA.

You might have thought getting stoned and eating $25 worth of Chinese food was impressive, but you’ve got nothing on Eric.

When Virginia Wade’s daughters went off to school in 2010, the stay-at-home mother of 20 years realized she needed a hobby. She decided to start writing; it was something she’d always enjoyed but hadn’t previously had the time to take seriously. After brainstorming for a bit, she chose to pen a vampire-themed romance novel, because there’s nothing more poetic than biting off of Twilight.

After a few more attempts at exploiting the preexisting market, Wade decided she had to carve out a niche of her own. She settled on “cryptozoological erotica,” a genre which revolves around stories where people have sex with Sasquatch and other mythical creatures. It might sound absurd until you realize she was raking in $30,000 a month thanks largely in part to her “Moan For Bigfoot” series, a statistic that’s even more insane than the premise of the books themselves.

Wade eventually started writing more straightforward romances after Amazon started cracking down on material it deemed “obscene,” because Jeff Bezos apparently doesn’t understand art when he sees it. However, Wade had made more than enough to pay for her daughters’ education by the time she retired from the Bigfoot erotica game.

Living in the Library

Figuratively “living in the library” is a strange badge of honor amongst a subset of college students who haven’t figured out there are thousands of better places on campus to study. However, Steve Stanzak took the term a bit more literally when he realized his scholarship and student loans weren’t enough to cover the cost of housing at school.

In most cases, living rent free means either sleeping in public places or joining a cult or commune somewhere in Idaho. However, Steve managed to avoid all of those fates for seven months in 2004 when he permanently holed up in NYU’s  Bobst Library to save money.

Steve was a creative writing major who documented his experiences on a website called Homeless At NYU, which quickly caught the attention of students and administrators alike. While some of those administrators were skeptical of his story, they still decided to provide Steve with free housing for the remainder of the school year— all three weeks of it.

There’s apparently something about NYU that makes people have to go the extra mile in order to afford to go there (it might have something to do with the fact that it currently costs over $70,000 a year to attend). You might think Steve’s story would be hard to top, but you would be wrong. So, so wrong.

In 2012, a 19-year-old undergrad named Olivia answered a Craigslist ad looking for “girls with pretty feet,” because academia is a broken system that makes people answer ads like that in order to afford an education. She arrived at a spa in Midtown and soon discovered that she’d been recruited to join an underground foot fetish ringfunded by men willing to pay a $100 entrance fee— in addition to a $2 per minute surcharge— to massage, smell, and suck on feet.

According to Olivia, the clients she met with were very respectful, and she could make up to $800 in a good week. It sounds like the only real downside is having to deal with the mental image of a man fitting your entire foot inside his mouth permanently seared into your brain.

Auctioning Off Your Virginity

If the countless news reports bemoaning the rise of “hookup culture” are any indication, the average college student is a sex-starved fiend who spends their days Tindering instead of studying in the hopes of bedding as many people as possible during their time at school. Unfortunately, promiscuity doesn’t pay in the vast majority of cases, but abstinence apparently does— at least based on the number of people who have auctioned off their virginity to pay for college.

In this case, “people” really means “women,” as there aren’t many bidders out there willing to pay big bucks for ten seconds of awkward disappointment and the profuse apologizing that tends to follow. However, there are apparently plenty of people who are willing to spend hundreds of thousands of dollars in pursuit of someone in possession of a largely unverifiable social construct. Rich people do the darndest things!

Over the past few years, multiple women have put themselves on the market in an attempt to pay for their education. In 2016, a 20-year-old Russian woman by the name of Ariana opened bidding on her virginity at $170,000 in order to pay for medical school (which is about as much debt as a doctor typically accrues during their schooling).

However, Ariana has nothing on an 18-year-old Ukrainian named Aleexandra Kefren who allegedly auctioned herself off to a Hong Kong businessman for the jaw-dropping price of $2.5 million (the auction house that coordinated the deal kept $500,000, but I’m sure she’ll get over it somehow). Considering her entrepreneurial spirit, it’s only fitting that she plans to use the money to study business and marketing at Oxford.