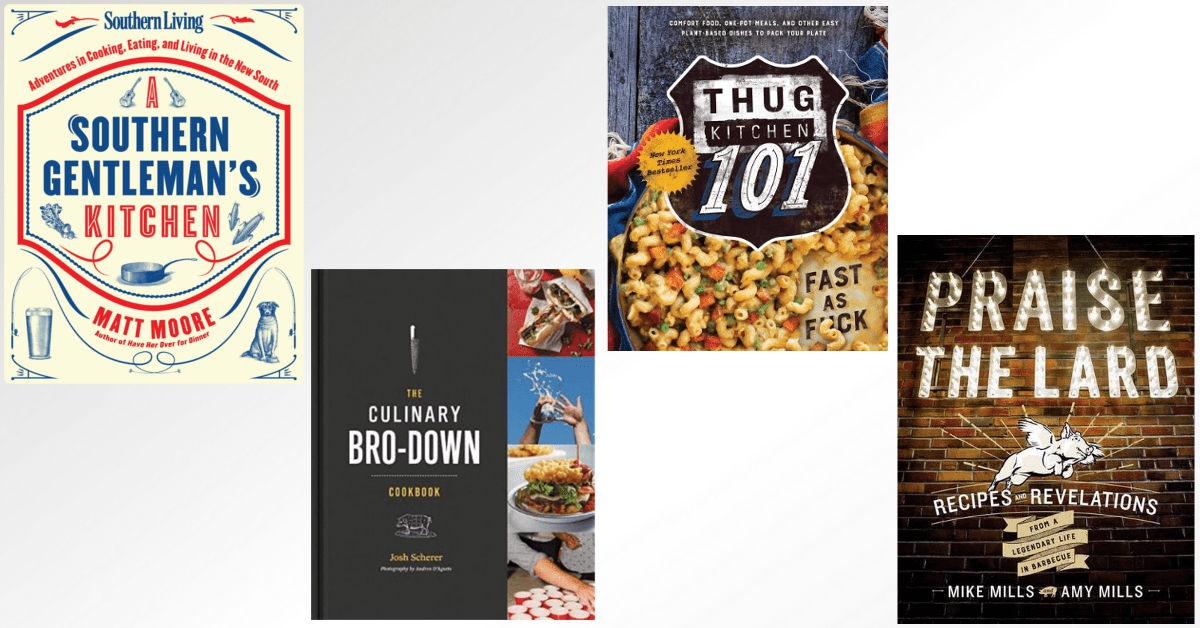 Bros, we aren’t typically known for dabbling in the arts of cooking fine cuisines. Somehow we evolve from ramen noodles to scrambled eggs then eventually we’re a dad taking pride in our grill-work.

Well, it’s time to step up your chef-game beyond life as grillmaster. A few simple recipes go a long way and any of these cookbooks for men give you that plus much, much more. Whether you cook for yourself, cook for a full family, or just want to impress your next date – these dude approved cookbooks will help you step up your game in the kitchen.

About The Culinary Bro-Down Cookbook by Josh Scherer:

There was never anything wrong with instant ramen. But there was never anything wrong with not being on the moon, either. That didn’t stop Neil Armstrong, Buzz Aldrin, and that other guy from changing the course of human history with a few daring steps and a super dope catchphrase. So too shall journalist and blogger Josh Scherer change the course of late-night, often-insane, sometimes-smart-but-always-monstrous munchie food that puts your MSG packet garbage to shame.
You’ll find more than seventy creations broken into the ten “brossential” food groups like: Beer, Fried Things, Tacos, and Struggle Snacks (because money is hard). Josh’s recipes range from indulgent eats like Beer-Poached Bratwurst Party Subs and Mac ‘n’ Cheese Nachos to hella-classy dishes like Broccolini with Burnt Lemon Hollandaise and Pork Belly Tacos with Fish Sauce Caramel. Sprinkled in are the unholy commandments for bro cooking, such as “bagged wine is the only wine you need,” and Josh’s expert advice on how to beat a hangover (it’s mostly just pastrami and emotionally purging movies).
The Culinary Bro-Down Cookbook is full of irreverent essays and anecdotes, but running throughout is a deep sense of soul and self that strives to answer the question: Why can’t the deep-fried nonsense you eat with your bros at 2 a.m. have the same emotional gravitas as an intimate family dinner?

This ain’t no cookbook. This ain’t no memoir. This is Action Bronson’s devotional, a book about the overwhelming power of delicious—no, f*cking amazing—food. Bronson is this era’s Homer, and F*ck, That’s Delicious is a modern-day Odyssey, replete with orgiastic recipes, world travel, siren songs, and weed.
Illustrated, packed with images, and unlike any book in the entire galaxy, Bronson’s F*ck, That’s Delicious includes 40-plus recipes inspired by his childhood, family, tours, and travels. Journey from bagels with cheese that represent familial love to the sex and Big Macs of upstate New York fat camp and ultimately to the world’s most coveted five-star temples of gastronomy.

PRAISE THE LARD: RECIPES & REVELATIONS FROM A LEGENDARY LIFE IN BARBECUE

About Praise the Lard by Amy + Mike Mills:

Mike Mills and Amy Mills, the dynamic father-daughter duo behind the famous 17th Street Barbecue, are two of the most influential people in barbecue. Known as “The Legend,” Mike is a Barbecue Hall-of-Famer, a four-time barbecue World Champion, a three-time Grand World Champion at Memphis in May (the Super Bowl of Swine), and a founder of the Big Apple Block Party. A third-generation barbecuer, Amy is the marketing mind behind the business, a television personality, and industry expert.
Praise the Lard, named after the Mills’ popular Southern Illinois cook-off, now in its thirtieth year, dispenses all the secrets of the family’s lifetime of worshipping at the temple of barbecue.
At the heart of the book are almost 100 recipes from the family archives: Private Reserve Mustard Sauce, Ain’t No Thang but a Chicken Wing, Pork Belly Bites, and Prime Rib on the Pit, Tangy Pit Beans, and Blackberry Pie. With hundreds food photos, candids, and illustrations, this book is as rich as the Mills’ history.

A SOUTHERN GENTLEMAN’S KITCHEN: ADVENTURES IN COOKING, EATING, AND LIVING IN THE NEW SOUTH

About A Southern Gentleman’s Kitchen by Matt Moore:

Today, in addition to being chivalrous, honest, and generous, a Southern gentleman is socially connected, well-traveled, and has an appetite for life. In this part-cookbook and part-guidebook, Matt Moore embraces a fresh perspective on what it means to cook, eat, and live as a true Southern Gentleman in the 21st century. Moore takes readers on an entertaining walk through the life of a Southern gentleman using recipes for 150 distinctly simple Southern dishes for every meal of the day, plus tales from family and some well-known friends. Gorgeous full-color photography graces this culinary update on authentic Southern cuisine. Featured recipes include everything from Seafood Gumbo and Gameday Venison Chili to desserts like Grilled Georgia Peach Crisp and favorite cocktails like The Brown Derby and NOLA Sazerac.

Thug Kitchen 101 includes more than 100 easy and accessible recipes to give you a solid start toward a better diet. TK holds your hand and explains ingredients from chickpeas to nooch so you’ll feel confident knowing exactly what the f*ck you’re cooking. This kickass kitchen primer also serves up health benefits and nutrition to remind everyone, from clueless newbies to health nuts, how a plant-based lifestyle benefits our bodies, minds, environment, and pocketbooks. THAT’S RIGHT. EAT GREEN, SAVE GREEN.
So scared of commitment you can’t even dedicate some time to cook? Thug Kitchen’s here to fix that sh*t: All recipes in TK 101 are guaranteed to be faster than delivery, so you can whip up some tasty meals with simple ingredients regardless of when you stumble home from work. You’re too damn important to be eating garbage, so TK has made it easy to take care of #1: you. No needless nonsense or preachy bullsh*t. Just delicious, healthy, homemade food for all the full-time hustlers out there.

THE DUDE DIET: CLEAN(ISH) FOOD FOR PEOPLE WHO LIKE TO EAT DIRTY

About The Dude Diet by Serena Wolf:

In The Dude Diet, Serena Wolf shares more than 125 droolworthy recipes that prove that meals made with nutrient-dense whole foods can elicit the same excitement and satisfaction associated with pizza or Chinese take-out.
The Dude Diet also demystifies the basics of nutrition, empowering men to make better decisions whether they’re eating out or cooking at home. Better still, each recipe is 100% idiot-proof and requires only easily accessible ingredients and tools. With categories like Game Day Eats, On the Grill, Serious Salads, and Take Out Favorites, The Dude Diet will arm dudes and those who love them with the knowledge they need to lead healthier, happier lives—with flattened beer bellies and fewer meat sweats.

TASTY LATEST & GREATEST: EVERYTHING YOU WANT TO COOK RIGHT NOW

About Tasty Latest And Greatest (An Official Tasty Cookbook) by Tasty:

Tasty, Buzzfeed’s popular cooking brand, delivers both comforting and healthy weeknight dinners for meat-lovers, vegetarians, and vegans alike, plus treats like ice cream, chocolate desserts, and rainbow recipes galore. You’ve been mesmerized by their top down recipe videos, but there’s still something about having a tangible album of edible deliciousness at your fingertips. Enter: TASTY LATEST & GREATEST.
This cookbook is just that: 80+ winning recipes, anointed by fans like you, that have risen to the top of the heap, powered by likes and comments and shares and smiles and full bellies. They represent how you’re cooking today. Whether it’s a trend-driven dish like a pastel glitter-bombed unicorn cake or a classic like lasagna, every recipe has staying power. Now you can deliver on the promise of a great dish whenever the urge strikes. Get ready—your cooking is about to go viral.