#affiliate
BroBible may earn a commission if you buy a product or service via links in this article.
by Brandon WenerdSeptember 17, 2022 7:00 pm 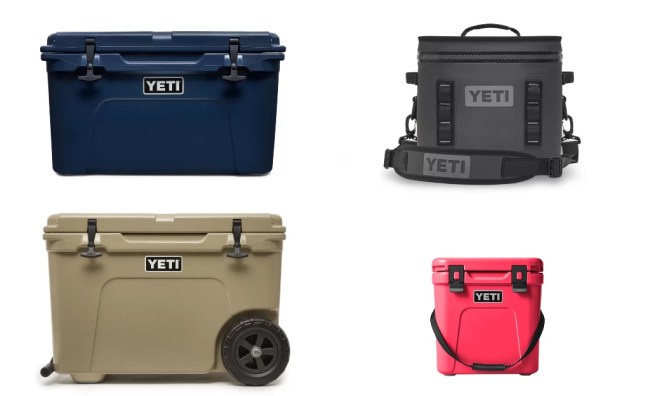 There’s no denying that YETI Coolers are some of the most durable and best-performing coolers on the market. The best YETI Coolers can keep your food cold for days, even when left in direct sunlight. They’re ideal for camping trips, fishing trips, backyard BBQs, and days at the beach.

It all started by reimagining what a cooler could be. And a great viral video.

In 2009, YETI Coolers, a then-unknown company, went viral with a YouTube video called “Bear vs. YETI.” In the video, the Austin-based company claimed its flagship cooler, the Tundra 45, was “bear-proof.” They put it up to the test by leaving a meat-filled Tundra 45 in a pen of grizzly bears. The bears battered it, but ultimately it held up. A branding moment for the young company was born.

YETI Coolers quickly became the go-to cooler for serious outdoorsmen. YETI made the best coolers on the market fit their work hard, play hard lifestyle – a tough-as-nails cooler that promised to keep ice for days on end.

These days, YETI is a multibillion-dollar publicly traded company. They have retail stores, selling so much more than just coolers.

Here’s my guide to the best YETI coolers and when to use them, depending on the situation you need a cooler.

The best YETI coolers, ranked for all occasions 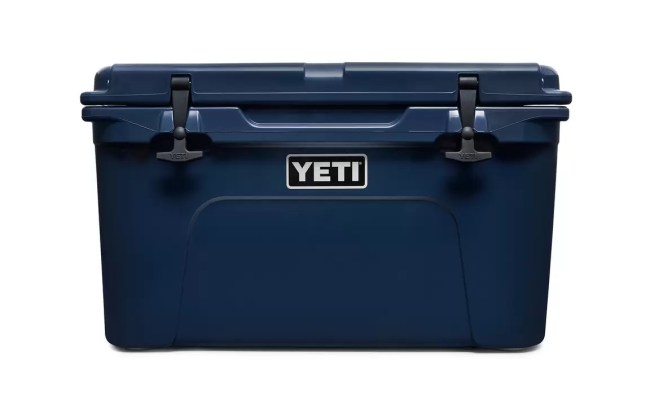 Editor’s pick: One of the best YETI coolers for all occasions

Who says you can’t be tough and beautiful? YETI Tundra 45 Hard Cooler is the ultimate weekend warrior cooler. It’s a beast. Impact-resistant, sealable, and boasts three inches of PermaFrost™ Insulation for max coldness. It’s basically indestructible thanks to YETI’s patented Roto-Molded™ construction and FatWall™ Design. These three hallmarks are what put YETI coolers on the map.

Like all the coolers in the YETI’s flagship Tundra series, it’s UV-resistant and keeps ice for three or four days without a problem. The YETI Tundra 45 has enough capacity for 28 cans of regular-sized beverages. Also: Keeps your catch fresh on ice while heading back to the marina. At 23 LBS empty, it’s also relatively easy to lug around and store in the garage.

If you need a hard-cooler, the YETI Tundra 45 is the true workhorse of the YETI Coolers family. 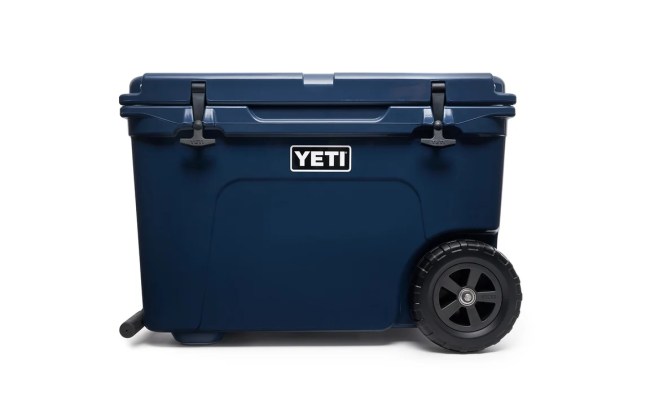 Looking for a YETI cooler with wheels? The sturdy handle and tough wheels make the Tundra Haul® cooler as convenient to transport as it is hardworking.

But don’t let its easy portability fool you – the YETI Tundra haul still features an extra-thick Fatwall design for unmatched ice retention, as well as YETI’s signature Permafrost insulation “so that your ice stays ice.” The wheels are made of a solid, single-piece tire that’s puncture-resistant.

Wheeling to the beach, keeping bait cold, dragging across the marina from your truck to your boat, keeping your catch cold, wheeling around the patio or pool 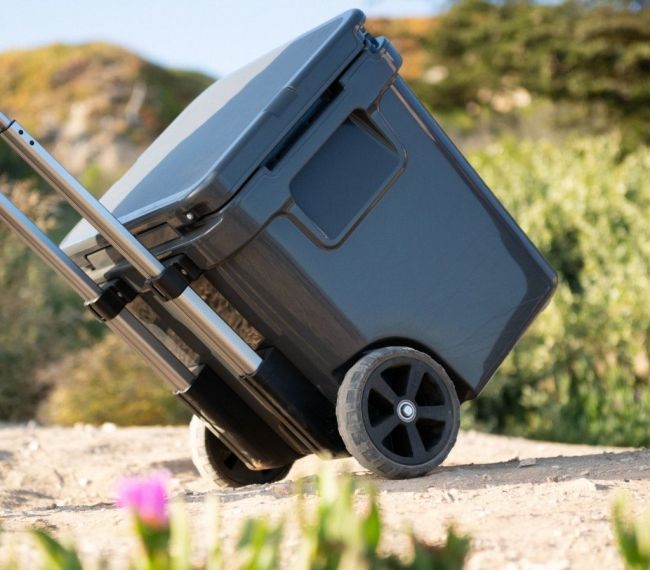 Long live the boxy-cooler. The YETI Roadie series is beloved by YETI fans for it’s portability and easy storage. YETI Roadie coolers packs well and keeps cold just as well as a Tundra, but requires about half the space as a Tundra. Most importantly, you can get a cube-shaped YETI cooler with wheels, so it rolls nicely through parking lots for tailgates. Comes with an ultra tough Periscope Handle that’s retractable and easy to haul. Truly the suitcase of coolers.

Wheeling what you need around the parking lot for tailgates or wherever you need to go. 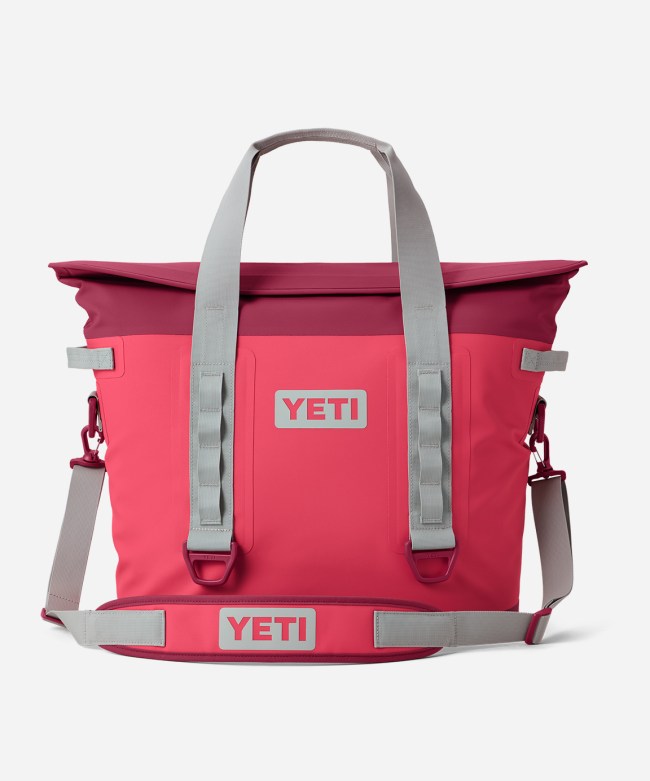 YETI changed the hard cooler game forever with the introduction of the Tundra 45. Almost all coolers before were shoddy and cheap, retaining ice for only a couple hours during summer heart. Then they changed the game again by reinventing the soft cooler. The YETI Hopper M30 became the ultimate easy-to-carry soft cooler for beach days and outdoor adventures.

YETI R&D hit it out of the park with the YETI Hopper M30’s HydroShield™ Technology. This creates an “ultra leak-resistant, yet easy-to-use closure” that’s sealed up with a magnetic strip at the top of the cooler. The wide mouth makes loading food easy on the go, which is perfect for picnics or poolside. Quick-Release Buckles keep everything secure inside until you’re ready to remove them and enjoy your food.

Speaking of cold: The YETI Hopper M30 features YETI’s COLDCELL insulation technology; Closed-cell foam that offers impressive cold-holding capabilities, keeping your frosty goods ice cold. The outside is made from YETI’s DRYHIDE™ SHELL – a high-density fabric that resists mildew, punctures, and UV rays. It’s waterproof, of course. The inside is made of leakproof fabric.

The YETI Hopper M30 holds what you need for a day with a couple of friends – clocks in at 7.2 gallons, capable of 20 cans with ice or about 28 pounds of ice itself. Retains ice for about a day or so, based on my personal experience. 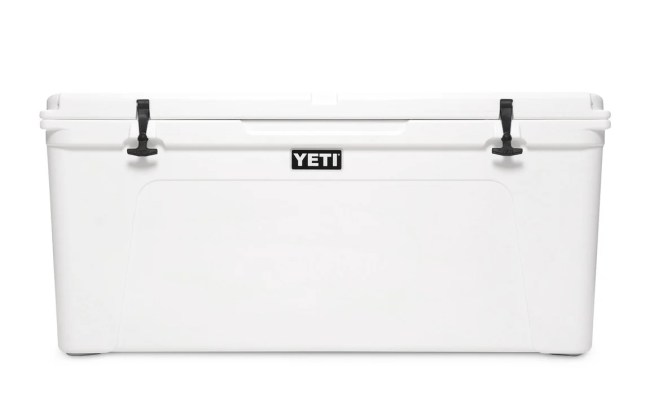 Editor’s pick: The best large YETI cooler for most purposes

Super-sized YETI. Though technically there are bigger YETI ice chests out there (the Tundra 210, 250, and 350), the YETI Tundra 160 suits most purposes for fishermen and hunters.

At 48 LBS empty, it’s one of the best YETI coolers for going big and going home.

The YETI Tundra 160 Hard Cooler is an outdoor maniac’s dream come true. The large-and-in-charge cooler can hold your hunt and keep it cold – elk, multiple deer, tuna, wahoo, or mackerel. It’s proven over and over again to be bear-resistant. Whatever you need to bring back from the field to the butcher. This ice chest is built to keep game fresh from season to season, whatever that means to you as a sportsman.

Or – it’s simply the biggest and best cooler for all your friends and family at the tailgate or BBQ. 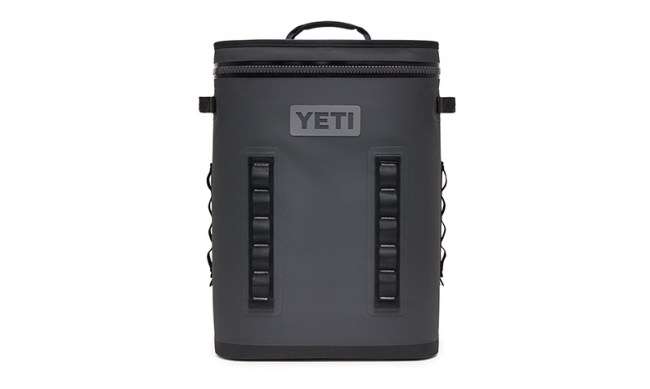 The Hopper BackFlip™ 24 is YETI’s first cooler engineered to carry as a backpack. The entire point of the Hopper BackFlip 24 is comfortably getting your food and drinks cold from Point A to Point B. It’s built taller and wider than its Hopper Flip counterparts, with superior cold-holding and 100% leakproof zip. As a backpack, it’s designed to efficiently distribute the weight of your goods. Ergonomic shoulder straps make hauling the cooler more comfortable. Also includes a removable chest strap and waist belt are included for added stability and security. Holds about 20 cans of your favorite beverage. 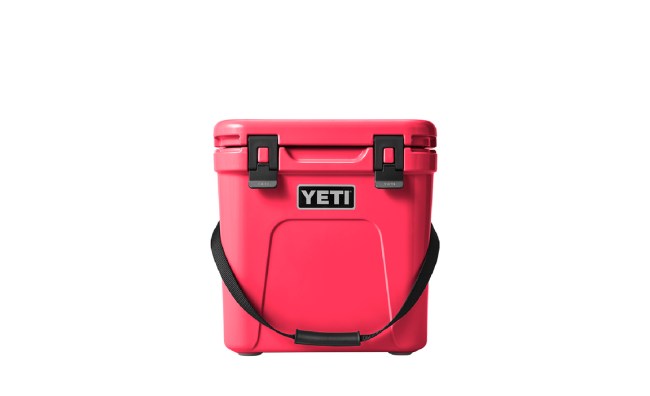 Need a light but rugged cooler for your jobsite? Or a simple backyard cooler to prop your feet up after mowing the lawn? The Roadie 24 Hard Cooler is YETI’s improved version of the best-selling Roadie. It’s 10% lighter weight and holds 20% more can capacity, yet boasts the same quality as the original. It only weighs 15LBs empty, so lugging it around is no problem. YETI claims the Roadie 24 can hold 18 cans of beer with a standard 2-to-1 ice ratio.

Easy to stash in the garage. Also, compatible with YETI’s Tie-Down kit so you can secure it to your boat, truck bed, or trailer without any problems.

Hanging by the hotel pool, in the backyard, on the boat, at the beach, a great gift YETI cooler 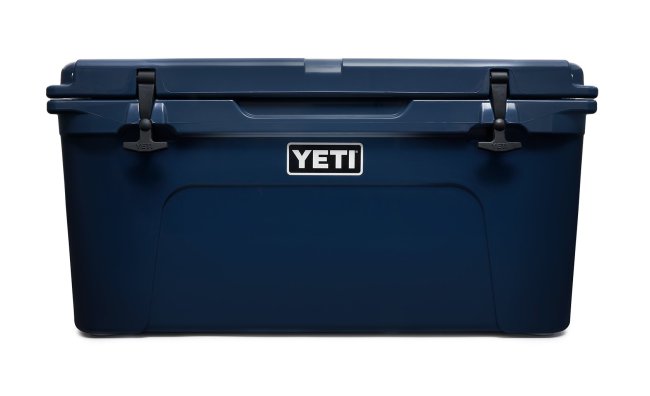 Sometimes you need two coolers for a fishing trip: One for lunch and a beer, one for icing down bait and your catch. The YETI Tundra 65 checks all the boxes for the latter if you’re heading out for salmon, sockeye, or stripped bass (or, as we call it in the Chesapeake Bay, rockfish). It’s YETI’s most versatile cooler, suiting practically all occasions one needs a YETI for.

Don’t forget to pre-chill your cooler for maximum performance. 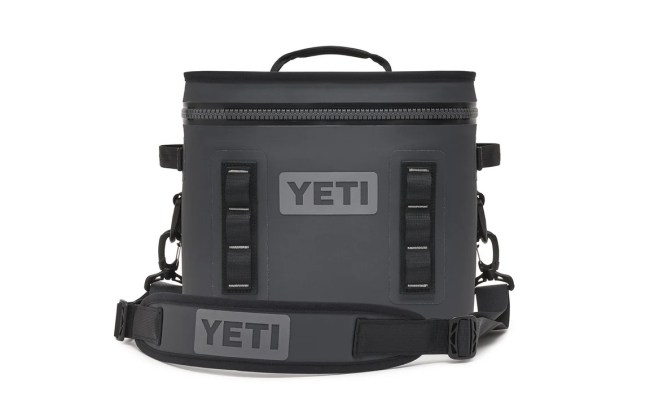 Editor’s pick: One of the best YETI coolers for day trips

Ever have a soft cooler that leaked all over your car on the way to the beach? Or an insulated lunch bag that doesn’t keep your egg salad safely cold in the summer heat?

Historically, soft coolers and cooler bags have been hot garbage – They’re convenient because they’re lightweight and easy to carry. Yet they barely retain ice. Boo that.

Say goodbye to leaky, uninsulated soft coolers. The YETI Hopper Flip 12 is a soft cooler that’s lightweight and compact. Thanks to YETI’s engineering, it keeps everything inside frozen with triple-density insulation. The zip seems are also 100% waterproof, so your ice won’t leak out if it takes a topple. It’s designed with a wide mouth opening to make loading snacks quick and easy – no more digging for food or soggy chips. Stores easy thanks to the compact, cubed design.

As a lunch box, to keep drinks cold in the car between stops on road trips, small picnics. Also a great gift YETI cooler 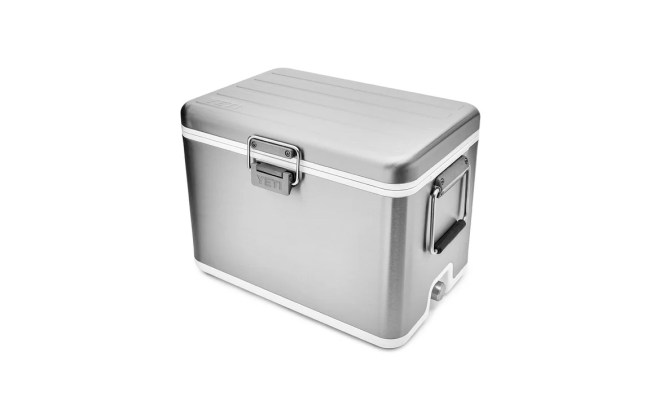 Editor’s pick: One of the best YETI coolers for keeping things cold for a long time (…and making an impression!)

This sleek cooler is a serious conversation starter. The V is for vacuum-sealed insulation. YETI went full Space Age when engineering the YETI V Series. It’s made with the latest in vacuum insulation technology. The exterior shell is made from kitchen-grade stainless to emulate the look of high-end appliances. It’s tough, stately, and ‘wears beautifully over time,” according to YETI. Unlike your grandfather’s antique ice chest from the ’50s, the V Series one won’t rust over time.

According to YETI, the V Series cooler can hold 46 12oz cans with 36 lbs. of ice. It’s tall enough to hold most bottles of wine standing upright. The walls in the YETI V series are much thinner than the ones in YETI’s Tundra series, but, thanks to the vacuum-sealed insulation, this cooler holds ice for a long, long time. According to one report, the YETI V series has held ice for up to three weeks.

Serious cold for hot summer days, keeping bottles of wine cold in the backyard, seafood feasts, stately occasions like weddings, corporate events, and hauling around food that needs to be kept at cold temperatures for days on end. 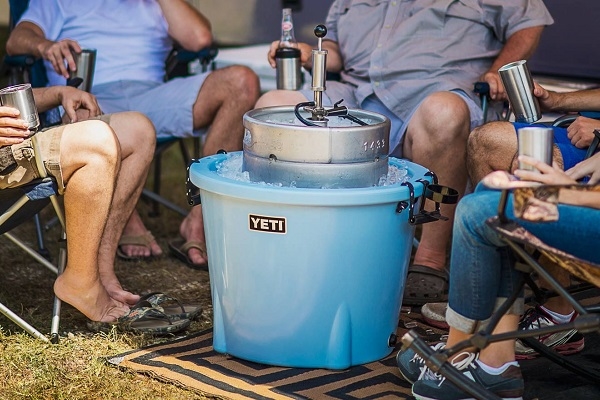 Editor’s pick: The best YETI cooler for parties and tailgates

Are you a tailgating machine? Meet the YETI Tank 85. The YETI Tank features YETI’s renowned cooler insulation in an open tub. It’s perfect for barbecues, tailgates, cookouts, or any other major social event. It keeps the cold longer than regular ice buckets. Features Double Haul handles for easy hauling. YETI’s Vortex Drain System makes cleaning up simple, no matter how bad your hangover is.

Any situation where it just doesn’t make sense to open and close a cooler. IE: Tailgates, parties, keeping the keg cold.