Biggest Xbox Sale Of The Year Has Discounts On Consoles, Games, And Even The Xbox One X 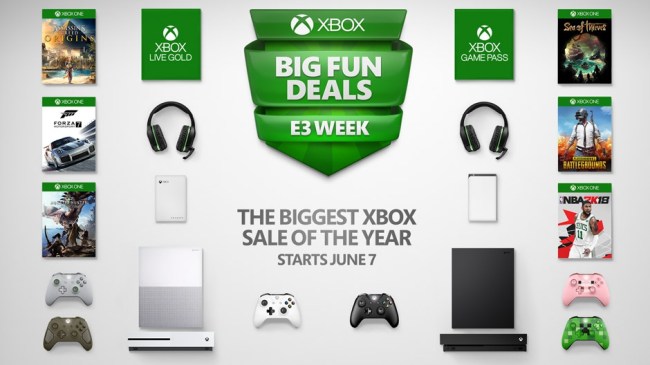 We are exactly a week away from the E3 2018 where gaming companies will showcase their latest hardware and video games. To get you ready for the upcoming Electronic Entertainment Expo, Microsoft is offering the “Biggest Xbox Sale of the Year.”

Starting this Thursday, June 7th, Microsoft has fantastic discounts on Xbox consoles, even the Xbox One X, which has never been on sale until now. Plus your favorite video game titles, accessories, as well as Xbox Live Gold subscriptions.

There will also be special deals on over 300 games, with discounts of up to 75% off select games. Plus your favorite games will be on sale including FIFA 18, Battlefield 1, Assassin’s Creed Origins, Monster Hunter: World, Sea of Thieves, NBA 2K18, and Forza Motorsport 7.

Remember, the sales start on June 7 and end June 23, so bookmark this page and come back on Thursday for all of the deals.