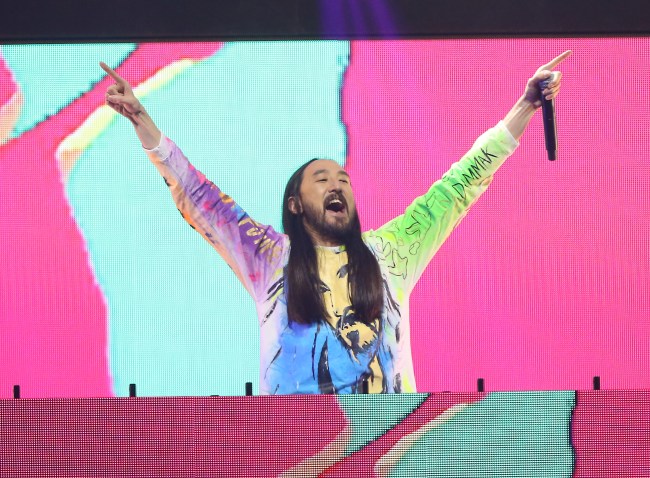 Life is GOOD if you’re Steve Aoki and get paid millions of dollars to live in Las Vegas most of the year where you get to party like a rock star at night and retreat to your desert mansion during the day.

He is one of the highest-paid DJs in the world with a net worth somewhere in the range of $75 million. According to Forbes, Aoki earns just under $30 million a year ($29.5) and he works his ass off. He performed over 200 shows in 12 months last year, sometimes twice a day. He’s actually done over 300 in a year at one point. He has sponsorships with T-Mobile, Japan’s largest airline (ANA), and with sparkling winemaker Luc Belaire.

Tack on the fact that Steve Aoki is the son of Rocky Aoki, founder of Benihana (net worth $40M), and it’s easy to see that Steve is living one of the most fun lives of anyone in the business and he’s got the receipts to prove it.

Technically, Steve Aoki’s badass mansion is in Henderson, NV and not Las Vegas. The 16,779-square-foot mansion reminds me of that movie Blank Check because it’s packed full of toys that we all wanted as kids but couldn’t afford or our parents wouldn’t let us have. Steve opened up ‘Aoki’s Playhouse’ in Las Vegas to Nate Robinson from The Player’s Tribune for a tour of his Las Vegas mansion and it’s hard not to be jealous of this place.

He acquired this palace back in 2013 for $2.3 million at auction and it’s since been overhauled into this glorious adult playhouse:

As awesome as this place is I find myself wondering if I could ever actually chill out in a house like this. There’s just so much going on. You’d have to be an incredibly high-strung/Type-A person to thrive in this house which Steve Aoki definitely is if he’s performing over 300 shows a year.

I’m a little bummed they didn’t devote more time to checking out Steve’s sneaker collection because he’s clearly a hypebeast who has an extreme interest in sneakers, a complementary habit to his love of modern art. He has art from Banksy, Damien Hirst, and every other huge name in Modern Art.

Like I said before, life is good if you’re Steve Aoki.