LAST CHANCE: This Is The Perfect Soccer-Based Game For Day Drinking Game And Tailgating

Cornhole, ladder ball, and beer pong are great, but there’s an explosion of awesome new games to play while tailgating in the last couple years. There’ Chippo, the golf-meets-cornhole tailgating phenomena. There’s Spikeball, a game that exploded after being featured on Shark Tank that we’ve been low-key supporting aggressively here on BroBible since our beginning in 2009. It’s now sold in retailers all over the country. There’s Ramp Shot and Bru Bag, two of our favorites for when all the aforementioned tailgate games get boring as hell.

It’s basically a soccer ball-handling/skills game that you can play with a beer in your hands. It’s like kicking at a water bottle that you never have to pick up. In their own words on Kickstarter:

It all started with water bottles and a soccer ball in a parking lot before our favorite soccer team took the field. The game evolved into a fun tailgate game and a great way to spend time with friends. The more we played Wobblrs™ the more we loved it but, the more we loved it, the more we HATED picking up the bottle every time it was knocked over. We noticed other people, including us, often chased water bottles across the parking lot and even crawled under cars to retrieve the bottles. We saw people crush plenty of cans and even shatter glass bottles so we created a product that is fun, safe, and self-rights.

So they created Wobblrs that never need retrieved when playing: 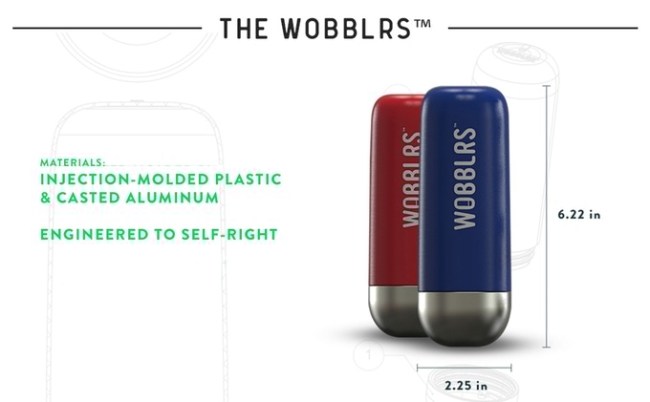 Wobblrs is brainchild of Roberto & Max, two Kansas City-based soccer fans who played together in college:

Roberto, a graphic designer, has worked for award-winning branding agencies since graduating college. There’s a 99% chance you’ll find him at every Sporting KC (MLS) home game chanting along with The Cauldron, Sporting KC’s supporter’s group.

Max is a school teacher who spends his time educating and inspiring children. He also has extensive experience as a youth, college, and as an olympic development soccer coach. He knows how to connect with kids and make learning fun! Together, they have 50 years of experience playing the game of soccer and are excited about its future in the United States.

Here’s how you play, according to the creators of Wobblr:

1. Set each Wobblr inline at a distance you are comfortable with.

3. Teams stand behind their designated Wobblr and alternate kicks as well as players.

4. Players cannot obstruct the ball while the ball is in play.

Here’s how you score, according to the Roberto and Max

Go support the project for yourself over on Kickstarter…