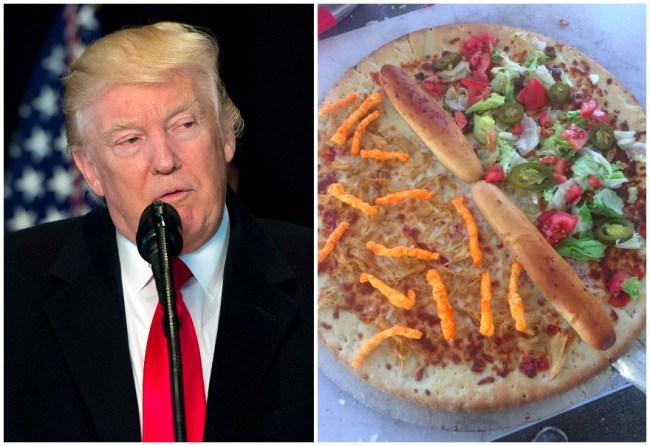 I’ll tell you what. When I want a pizza, there’s nothing I want more than Mexico to pay for it and “IT’S GONNA BE UGGGEEEE.” That’s why I love this stunt from Peace Of Pizza Texas. They made a pie inspired by Donald Trump’s border wall: “Half is a Mexican taco pizza, separated by a white bread border, other half is a chicken cheetos pizza (Cheetos inspired by Trumps skin tone)!”

ALL NEW TRUMP INSPIRED PIZZA — Half is a Mexican taco pizza, separated by a white bread border, other half is a chicken cheetos pizza (Cheetos inspired by Trumps skin tone)!  The All bread border was hand placed by Raul. Raul is a honest hardworking Mexican American. He is torn on which side of the pizza he likes better…..when asked he simply said, “I’m on the fence.”

Cost: $12 to $15 billion, presumably by destroying NAFTA and making an insane import tax on avocados and tequila. Sadly, some Trump snowflakes don’t see the humor in the joke:

Here’s the original post, via our friends at Food Beast:

Circa has a quote from the owner of the pizza joint about how he doesn’t give a flying fuck about offending conservatives. Hell yea, First Amendment!

“It doesn’t really bother me to offend somebody ’cause to be honest, they probably weren’t a customer of mine to begin with.”

Even better, Peace of Pizza upped the ante on the political humor trolling. Hopefully the Democratic-Socialists are self-aware enough to take a joke, unlike their conservative snowflake counterparts:

Peace Of Pizza Texas isn’t the only place to dream up Trump Wall-themed pizza pies. Here are a couple others that I found on a pretty quick Twitter search. Really dig the idea of mozzarella sticks as a the wall instead of breadsticks. Mozzarella sticks ON pizza are divine.

This is not political just funny. Behold the Trump Pizza 🍕half Mexican/half American ingredients, dividing wall down the middle (by @Imgur)😂 pic.twitter.com/b9xOVrTb0X

There's a pizza in New Zealand, inspired by President Trump's proposed wall — and half the ingredients are Mexicanhttps://t.co/paWfWbmakB pic.twitter.com/RD03pZXNUJ