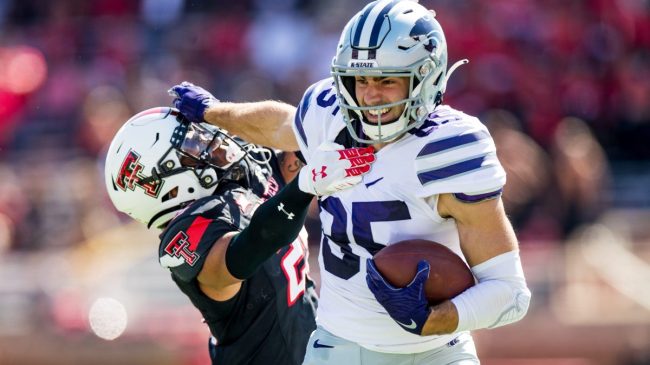 Kansas State and Texas Tech are both coming into the game off of statement-making, if not season-saving victories this past weekend. The pair downed Big XII-departing powers Oklahoma and Texas, respectively. In doing so ensured that the winner of this game remains a threat for Top 25 consideration. It also changed the conference narrative from two powers to a ton of parity.

The line for the game opened with Kansas State minus-8 and it is expected to see some fluctuation during the week. In fact it could see a big swing as both quarterbacks have great film to look at and it is easy to fall in love with them.

Your play is going to be to pay the piper and take the moneyline for Kansas State. Do not let someone else talk you into the line, use the math. Kansas State opened its year with meaningless wins against South Dakota (34-0) and Missouri (40-12) but then lost a home game to Tulane (17-10) when it faced its first real adversity. Downing Oklahoma (41-34) marked the third time in four years for the Wildcats; so it still begs the question of which K-State team will show up this weekend. Not a team that makes us convinced to lay points.

For its part, Texas Tech has one meaningless blowout — when it bettered Murray State, 63-10 — before it showed its true colors. Tech won a close contest with Houston (33-30), lost on the road against N.C. State (27-14), and then downed Texas (37-34). When someone shows you who they are, believe them.

Kansas State plays to its competition. So does Tech. That means the game will stay close, so ignore the number.

If you are going to try and double down, be ready to act now. This game figures to be a close game but we still believe Kansas State is the better team. The line could move down if bettors think that anything above 7 is too many, it could also be bought up if people think that Texas Tech was more of a fluke winner versus Texas.

Regardless of the line you stay focused on the moneyline and history. Kansas State owns Texas Tech, especially in Manhattan. The Wildcats have won six straight in the series, as well as 10 of the last 11. Moreover, Tech has not won in Manhattan since 2008 — meaning not even Patrick Mahomes got it done on the road.

The offer is free money, so take Kansas State and get $200 from BetMGM!