BroBible may earn a commission if you buy a product or service via links in this article.
by Dallas JacksonSeptember 29, 2022 9:50 am 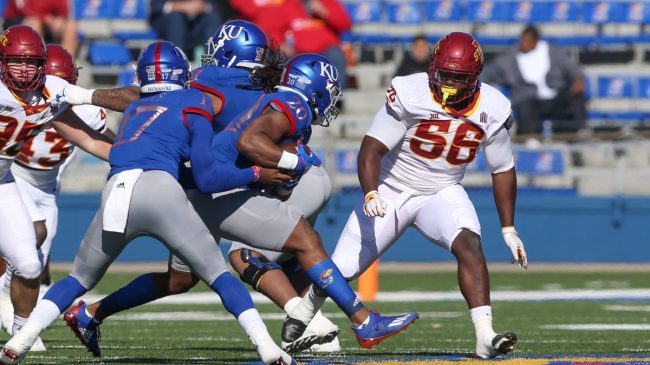 What a difference a year makes. Wow. For a frame of reference of what is to follow, understand that it was Oct. 2, 2021 that Iowa State bettered Kansas 59-7. The opening line for the forthcoming game on Oct. 1, 2022 is Iowa State minus-3.5. Kansas is playing with house money right now at 4-0, but it also believes it is this good. There should be pressure on Iowa State for this to be a must-win game — especially with its coming schedule and the relative parity in the Big XII — but human nature suggests that Kansas will be a look-ahead opponent for the Cyclones.

This is also one of the first times in recent memory that Kansas will feel like it is the home team against Iowa State.

Add it all up and this game has all the makings for a classic trap game, so be ready for it.

One thing we do know is both teams will score.

Kansas is moving the ball in both facets of its offense. Jalon Daniels has thrown for 890 yards with 11 TD versus just 1 interception. The ground game is also averaging almost 250 yards per contest. The lowest point total that Kansas has this season is 35 against Duke last week. Yes, it is Duke, but the team also put up 55 versus WVU and 48 against Houston. Are any of those teams good on defense? No. Neither is Iowa State. Kansas will do its part on offense.

Do you wanna know who else isn’t that good on defense? Kansas.

The Jayhawks have allowed 27.5 points per game and nearly 400 yards of offense to open its season. Kansas is ranked 88 in total defense. It is 99 in pass defense; also coming in at 83 in scoring defense. In other words, it isn’t too good on that side of the ball but at least those numbers are against Power 5 teams.

Iowa State has not inspired much confidence on offense through four games but it is still Iowa State.

Hunter Dekker is hitting on 72-percent of his passes but has been victimized by untimely interceptions. He is also only making his fourth career start which means Kansas will throw things at him that he still has not seen. The team is also predictable in the running game, seemingly never doing anything like a screen or draw to disrupt the defense. Cumulatively the Cyclones are only averaging 135 yards per game on the ground, and does not have a player that can score on any play like it has in the past.

Everything about Iowa State (right now) is also being weighed down by a 10-7 victory against Iowa, but that may be more the real Iowa State than we saw in previous years. It has a 42-10 win against Southeast Missouri State; also beat Ohio by a similar 43-10 margin. Who cares. Iowa State lost to Baylor last week 31-24, which could have been worse after a disaster third quarter.

All of the earmarks are there for this game to be fun to watch, and potentially come down to a final possession.

The Jayhawks have played better teams. With better results. They are the more experienced team. They are playing at home. Kansas is just crazy enough to believe it can win, and we are ready to ride to the window together.