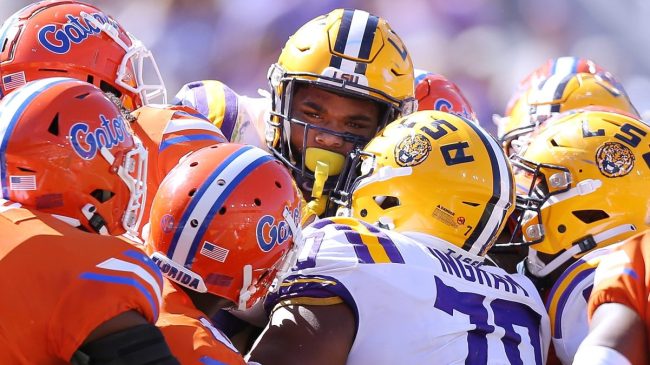 The beginning of two measuring stick stretches are set to start this weekend in Gainesville. LSU and Florida both enter the game at 4-2, and each comes in with plenty of questions about its validity.

LSU got absolutely wrecked last weekend by Tennessee. Don’t let the 40-13 pummeling stick too long. It did not reveal anything new about LSU. It highlighted what we already knew: The offense is inconsistent as it learns a new system on the job. Its patchwork offensive line can get exposed. Skill position players have as low of a ceiling as any time we can remember at LSU. And the quarterback is all over the place. The defense is just ‘fine’ but it is not deep. The flawed roster makes it easy to see why there is a new coach on the sidelines.

LSU revealed cracks in its loss to Florida State to open the season. It was able to mask them in blowouts against Southern U and New Mexico. It overcame itself against Mississippi State and Auburn. Tennessee was just vastly superior and it showed.

Florida is not Tennessee. It is equally flawed.

The Gators opened the season on the flip of LSU. Florida stole a game from Utah at home to juice instant optimism into the program. From there it has been an “LSU” of results. A home loss to Kentucky was followed by a narrow, 3-point win, against South Florida at home. In a transitive property game, Florida played well in a 38-33 loss to Tennessee. It has since crushed Eastern Washington in a meaningless win and then Missouri gave the team fits, in The Swamp, 24-17.

This is the last Florida home game until Nov. 12 and Florida goes onto a bye after this week to ready or Georgia.

Two even teams, that are plenty familiar with one another, gives confidence in going against the grain a little.

LSU has showed fight and it was embarrassed. That group is ready to answer the bell and take respect back. Florida has been smoke and mirrors in too many games. Too many home games to be specific.  This is a pick on motivation. A motivated LSU has the edge on a reactionary Florida team. The game will be a fight til the end and we have seen LSU fight to the end.

Geaux with the Tigers on the road and get your free $200 when a touchdown is scored with BetMGM.