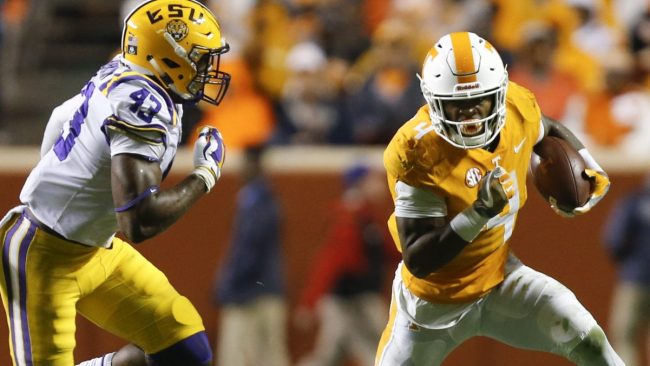 No. 8 Tennessee taking on No. 25 LSU is one of only three ranked-versus-ranked pairings for college football this weekend. With all due respect to TCU-Kansas and Utah-UCLA, this is the SEC. It just means more.

The baseline information is that this is not a regular SEC battle, so there is plenty of hatred but not much familiarity. The last time the two teams played was 2017; so no one on the rosters – and barely anyone else on the coaching staff — factored into the decision. It was back in 2007 that the two last played with both teams being ranked. Take history out of this game. It is meaningless.

The game is in Baton Rogue — which could play heavily as an advantage for LSU — but it is an early day game. If this were a night game, it would have a bigger baseline impact. As great as the atmosphere will be in the Bayou, unless LSU opens hot and goes on tilt, the Vols should not be rattled by environment.

As for the Jimmy’s and Joe’s on the field… it is shockingly an advantage to Tennessee. Perhaps outside of the receiver room, the Vols could have the arguable ‘better talent’ on the field. This is the human nature element that can often swing games.

Tennessee is coming off of a bye. It came at the perfect time for the Vols. It had an emotional win against the hated Florida Gators and then took a week off. The players got to relax. Refocus. More importantly it let the emotions settle, which means they can more easily get ramped back up for this week.

LSU had to fight and claw for a win last week against Auburn. It was a game that was a little too close for comfort after thinking it was an easy W. LSU is improving but it is also learning how to fit with Brian Kelly’s system. It has not been smooth for them.

The turning point here is that Tennessee is a team that starts fast. Josh Heupel teams get out of the gate fast. LSU has opened the last two weeks down 13-0 against Mississippi State and 17-0 against Auburn before battling back for a pair of wins. The Tigers managed to do it with only 85 yards passing last week, too. That is more about Auburn than LSU.

The Vols will start fast, take the crowd out, and stay focused to close out the game. The Vols are better than Mississippi State and Auburn… and more importantly, LSU.

Roll with the Vols, and take your free $200 from BetMGM!