BroBible may earn a commission if you buy a product or service via links in this article.
by Dallas JacksonSeptember 29, 2022 11:44 am 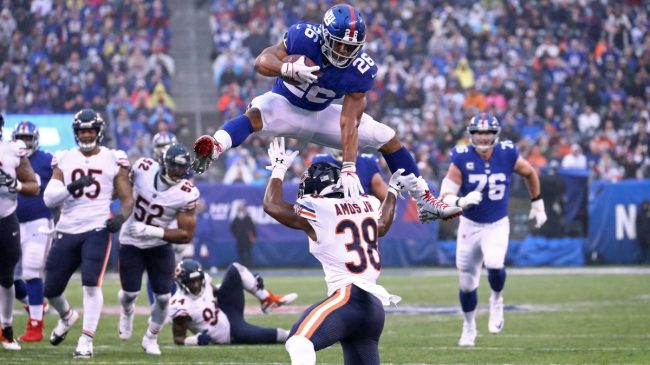 If you can find a prop bet for shortest tv-time game of the year, this may be your pick. Both the Bears and Giants are teams built on running the ball and have bend, don’t break, defenses. The clock will be moving and the amount of passes will be few.

First, take a look at the facts for both quarterbacks: Justin Fields has not completed more than eight passes in any single game this season. He has a total of 297 yards passing so far. In three games. That is less than 100 passing yards per game. In the NFL. In 2022. For his part, Daniel Jones has not thrown for more than 200 yards in any game this season, either.

There is not going to be an aerial display in this contest and there isn’t a marquis receiver to convince anyone otherwise.

In Chicago, Darnell Mooney and Cole Kmet have not taken the next step forward for the Bears to replace Alan Robinson. Those two have four (4) and two (2) catches, respectively. The leading pass catcher for the Bears is oft-injured running back David Montgomery. He has five receptions for 38 yards.

Likewise, Kenny Golladay and Kadarius Toney have been absolute zeroes for the G-Men. If you were curious, the leading receiver for New York is Richie James with 14 catches. One ahead of Saquon Barkley and Sterling Shepard. Shepard left the Cowboys game with an injury that is likely to end his season. He was leading the team in receiving yards and snap count.

That is where the rubber will meet the road.

Montgomery (knee/ankle) cleared out of the way for Khalil Herbert to shine in a victory over Houston last week as Chicago rushed for almost 300 yards. Herbert is going to need to have a similar game this week to keep the Bears in the contest. New York knows all of this and will load up to stop the run.

Chicago, despite its 2-1 record, has also done it with smoke and mirrors. It bettered San Francisco in a downpour with an unlikely second half comeback. It got blown out by Green Bay, and it eeeked out a win against an awful Houston team.

Here is your secret sauce.

Chicago is a one-dimensional offense and has relied on a defense that ranks 27th against the run. That is an unsustainable situation and one that will be exploited this weekend. Barkley has come back and looked more similar to his early career compared to his last couple of scuffling years. Giants coach Brian Daboll is a better game manager than is Matt Eberflus and he will let Barkley feast while protecting the ball.

The Giants playing at home is a major advantage; being able to gash the Bears defense on the ground will help loosen things up for Jones to also use his legs and throw just enough to cruise to a victory. Take the Giants moneyline and get your free $200 from DraftKings!