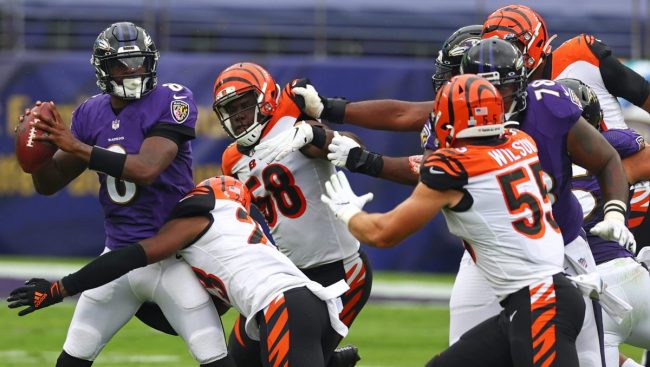 Hatred is about to reach a tipping point in Baltimore as the Bengals come to town for what figures to be one of the most fun games of the weekend. The Sunday Night Football showcase has all of the makings of an explosive scoring fest filled with big plays, hits, and swings.

Start with the hatred because this is more than a division rivalry. Baltimore is looking at this as a revenge game for how the Bengals beat them (both times) in 2021. If you need reminded, in Week 7 last year, Cincinnati brought home a 41-17 victory from Maryland. It rubbed salt in the wound during Week 16. The Bengals were already up 41-21; inside of two minutes Joe Burrow threw for a fourth touchdown. Oh, it also help him set a franchise record with 525 passing yards and it sure did piss off the Ravens as a whole.

Emotion is not going to be enough as both teams enter 2-2 (even if Baltimore should be 4-0) and so it is a must-win for both teams. It will also unlock the spot atop the division with — barring a tie — with one of these teams leading the pack.

So, let’s take a real look under the hood.

First, the Ravens are the third highest-scoring team in the NFL. The group is averaging 29.8 points per game and can move the ball with balance. Lamar Jackson has completed 76 of 117 pass attempts for 893 yards in four games. He has also had 11 touchdowns to just four interceptions. Rashod Bateman, Mark Andrews, and Devin Duvernay have all played well on that side of the ball. There is optimism with J.K Dobbins, Justice Hill, and perhaps the return of Gus Edwards to help Jackson move the ball on the ground.

That is to say nothing of Joe Burrow and his talented group of playmakers — that have already torched Baltimore. Ja’Marr Chase closed the last contest between the two with 8 catches for 201 yards. If you have watched the Ravens this year, you have seen plenty of teams cook that secondary. The aerial attack for both Baltimore and Cincinnati will have opportunity.

Cincinnati is struggling in two areas that Baltimore has to take advantage of in order to win.

First, the Bengals are not protecting Burrow very well. He has taken 16 sacks in four weeks. The Ravens should be getting both Tyus Bowser and Justin Houston back, which will aide the pressure.

Second, Cincinnati is also struggling to open holes and get Joe Mixon going. Surprisingly the team is seventh-worst in the NFL in rushing yards. It is averaging just 3.1 yards per carry, which is second-worst in the NFL. It has only cashed in one drive with a rushing touchdown and only has two plays over 20 yards on the ground.

As it is important to note, those results have come against the Steelers, Jets, and Cowboys — before its impressive home win against the Dolphins.

Baltimore is the desperate team here. It has lost some games it should have won — Miami and Buffalo — and now must win this game. Emotions will be high, but the Ravens have the matchups to take this one in an exciting shootout.

Bet the moneyline and get your free $200 from DraftKings!