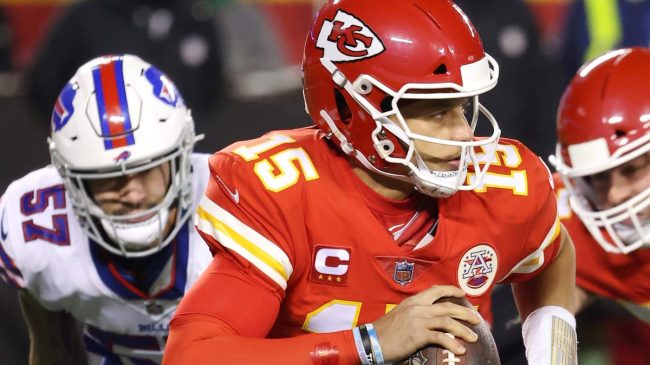 I like being right. I also like playing on Chiefs and Bills games. If you aren’t tracking, two weeks ago we nailed both the game against the Bucs, and the Bills beating the Ravens. We also put you on the path with an easy W versus Pittsburgh and called the Raiders craziness, too.

Now the paths converge as Kansas City takes on Buffalo. In Kansas City.

The Chiefs opened as three-point underdogs. It is the first time in Patrick Mahomes’ career that he is a home underdog. He opened his career as a home favorite in 41 straight starts. Insane. He is 7-0-1 in the previous eight underdog game, including that win over Tom Brady a few weeks ago in Tampa. Those previous eight were all on the road or a neutral site.

Also, note that Andy Reid has a career winning percentage over .700 with the Chiefs. He is also popping off at a .746 at home (56-19) since he got there in 2013. Kansas City has always been a tough place to play. The franchise owns a .610 winning percentage at Arrowhead since it opened … in 1972!

Buffalo looked great against Pittsburgh. That has more to do with Pittsburgh being really, really bad. Do not read into that outburst because it is not reality.

This game is screaming to pay attention to the other side of the ball, too. Buffalo has a defensive formula that looks like it was designed with only KC in mind. It will be interesting to see how it works this week. The Bills want to bring pressure with its front, and set back in zone to take away deep plays in the secondary. The issue will be that its defensive backs are hobbled and depth will be tested.

A more patient Reid is also allowing the run game to shine. The offensive line is coming together as the weeks pass and Mahomes is looking more confident behind it.

With the Bills secondary issue and the added chip of being a home-dog, the Chiefs will look better than against the Raiders and get a win.

Take the moneyline to get $200 back (plus your winnings) if you select the winner!