#NFL
BroBible may earn a commission if you buy a product or service via links in this article.
by Dallas JacksonOctober 26, 2022 7:55 am 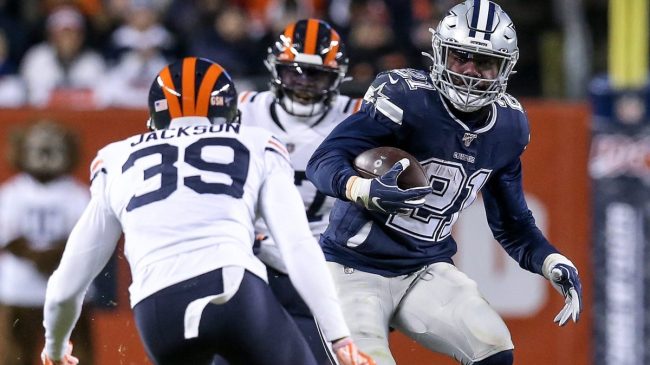 Well, that certainly was not expected. If you only saw the final score then you know the Bears bettered New England. The 33-14 game was one thing. It was the way that it happened — in total domination — that has people talking. And that it ended with Chicago taking a knee on the Patriots two means it could have been worse.

The Bears piled up 200 yards rushing for the second game in a row, and the third time this season. It did it against a Patriots defense that usually devours young quarterbacks. It was also a sign of the offensive staff making good on a promise to use the extra time between games to make adjustments. Justin Fields had more designed runs than simply extending plays. It worked. The combination of David Montgomery and Khalil Herbert worked to a near even split, effective in their own ways. Montgomery the 1A on the ground, Herbert the more explosive player with home run hitting ability in the passing game. All of it came together.

The worry is still there. Fields still did not do much in the air. Like he has not all season.

It was a familiar reading 13-of-21 for 179 passing yards to go along with a touchdown and an interception. It is about the same line as you would expect from Fields but it felt different. The plays felt more crisp even when the results were not there — four fumbles and a couple of missed plays — to name a few. But it worked to the tune of the team being 11-of-18 on third downs, with Fields converting nearly 75% of those plays.

Dallas is playing really well right now, especially on defense, and this feels like it could be a Bear trap.

Moreover, the Eagles may have made things worse for the rest of the league. The team attacked Micah Parsons and burned him on multiple plays. It was broadcast for the world to see and he took it as a challenge. So now we have an uber-motivated Micah Parsons to factor in. I don’t know what it looks like when a Top 5 defensive player gets more motivated. I’m not sure the Bears want to find out.

The Cowboys made a trade for interior presence Jonathan Hankins from the Raiders. It will only bolster a unit that is near the tops in most every defensive category – save for its rush defense. Plugging that hole prior to this contest was nearly a must-do item.

Some of the positives from the Bears win are equally attributed to how bad the Patriots are this season. Its mistakes on offense, which were many, could not be overcome. The Bears will not have the same luxuries on a short week against a superior opponent. The line on this game is into the double digits. That is way too much to play on but the moneyline, while high, has the better value with this offer from BetMGM.

Pay the price on the Bears moneyline, but get $200 back when a TD is scored!