#Chicago Bears
BroBible may earn a commission if you buy a product or service via links in this article.
by Dallas JacksonNovember 1, 2022 1:14 pm 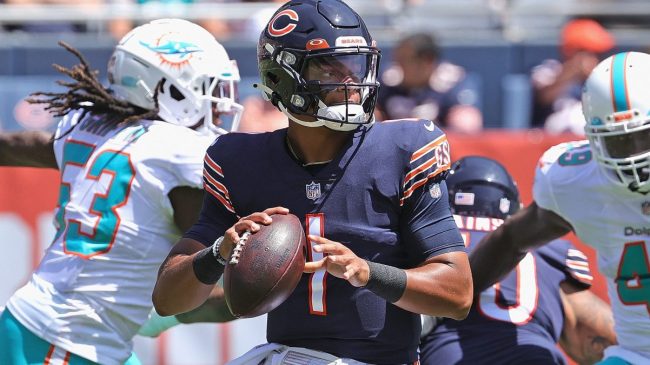 The Bears and Dolphins both are having a great week. Off the field, that is.

Miami made a strong signal that it believes it is for real at the trade deadline. The Dolphins added Bradley Chubb to its defensive front from Denver. This is a “going for it” move. It gave up disappointing running back Chase Edmonds, a first-round pick, and a fourth-round pick in 2024. It would have been the headline deal were it not for Christian McCaffery shifting coasts, from Carolina to San Francisco.

Chicago actually had a great deadline, too.

It signaled that the rebuild is on, however. The Bears have waived the white flag on this season.

It dealt linebacker Roquan Smith to the Ravens. Smith was the emotional leader of the defense and also lead the league with 83 tackles. He was set to depart as a free agent and the Bears were able to land a second- and fifth-round pick, as well as linebacker AJ Klein for him. That is a victory.

The team was also able to move Robert Quinn for a fourth-round pick to Philly. The Eagles already had a Top 5 defensive line and certainly is priming for a Super Bowl run with the addition. Quinn still has plenty in the tank, but he is 32. He will also be a free agent. So Chicago getting a fourth for a guy clearly not in the plans: that is a victory.

I have written just about every week about how bad the options are for Fields and that it is limiting his growth. Claypool has had inconsistent play and discipline. However he has consistently been able to be open and be a physical freak. The Bears gave up a second for him and they have to be hoping he is motivated. If he performs then the trade becomes a big victory because its a similar price paid as the Steelers did when they took him … and the current options are terrible.

Unfortunately, that is where the wins will end for the Bears. The Dolphins are going to win this game baring something completely unforeseen happening. This Miami team is vastly superior in basically every way.

There are two schools of thought for this bet.

You can open an account (with a minimum $10) bet and pay the near -250 for the Dolphins. You will feel pretty good knowing that you are going to get $200 back when a TD is scored, and the Dolphins will score! But you are also taking some risk that Tua doesn’t get knocked out of the game. If he does, then you are going to be sweating the worry that the version of the Dolphins who lost to the Jets 41-17 doesn’t re-take the field without him.

Or, you can open an account and root for a cool story. Take the Bears with their backs against the wall, and add that immediate $200 when a TD is scored. You get the +175 (at opening) on the Bears. If they lose, you still know you are profiting with this incredible offer. If they actually win, you can show your friends your betting slip and tell them you never lost faith in the team!