#Football
BroBible may earn a commission if you buy a product or service via links in this article.
by Dallas JacksonNovember 13, 2022 2:18 pm 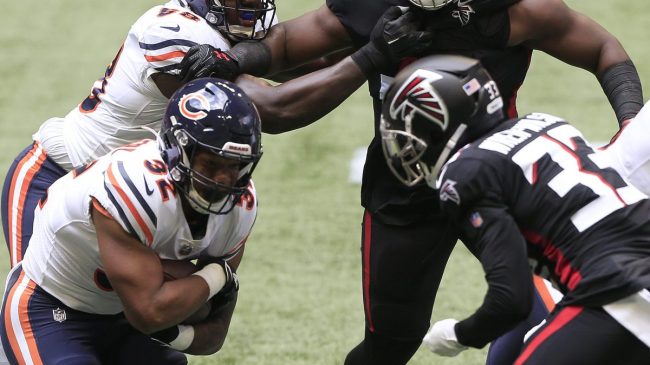 It is unusual that I get the same NFL team two weeks in a row to write about. So, Chicago here’s to you!

The offer this week is different than last, but the advice will be very similar. And, listen, I was all over the game against Detroit. I predicted it would be the second best game to watch and the second most fun game of the weekend, only behind Buffalo and Minnesota. Nailed it.

Gave you the breakdown on Fields’ revelation, and he busted out another insane game on the ground. Gave you that Cole Kmet was benefiting from a different playcalling style, and he secured two more touchdowns. Gave you the defense liability and its ineptness in the redzone. Even gave you the crazy crossover game sudoku.

Even told you exactly how to bet on it. And if you listened, you won. Let’s do it again.

This BetMGM offer only cashes if you bet the winner.

Chicago is going to win this game. Simply put, they are the better team. The Bears losing to Detroit makes this play even better, to me, because they are being undervalued. The line is Atlanta -3, -160. Giving the home team the customary three points means this is about a pick’em game. Sure. That is about right. But the moneyline opened with the Bears +145. I want in on that value.

Here is a weird thing to think about: The Bears have the talent edge in this game. Has that happened in a single game this season? No.

Justin Fields is better and more dynamic than Marcus Mariotta. If this is a quarterback league, and it is, then what Fields has done the last four weeks inspires a ton of confidence.

The skill positions are also a marked advantage to the Bears.

Through 10 games, Fields has rushed 104 times, with Khalil Herbert toting it 108 and David Montgomery for another 115. The group has piled up over 225 yards of rushing five games in a row. It is a group that you are taking all day over Cordarrelle Patterson, Tyler Allgeier, and Caleb Huntley.

The receivers may not be inspiring for either team, but even still, the Bears have the better group. The addition of Chase Claypool — though he has not put a lot on the stat sheet yet — has tipped the scale. Claypool, alongside Darnell Mooney, is an athletic pairing. There is also solid depth, though it is not sexy. And the aforementioned Kmet ramping up his game at tight end. Drake London has shown promise for Atlanta, but Olmide Zaccheaus is not accounted for much. Kyle Pitts should be elite — and is second on the team with 54 targets — but lags with only 25 catches and 313 yards. An elite athlete like Pitts averaging 2.5 receptions and 31 yards per game is horrendous.

As for the defense… both stink; there is no nice way to say that.

Chicago has been electric in its last three games. It has put up 29, 35, and 30. The Bears have also allowed 49, 35, and 31. It is one of the worst defenses against the rush in the league — though 10th best against the pass. It also traded two of its best players — Roquan Smith and Robert Quinn. It is not inspiring.

Atlanta, well, it is brutal, too. It is the worst in the league against the pass. It is an uninspiring 18th against the run.

Both units are giving up over 25 points per game. Yuck.

Now, I am a big fan of momentum, and Chicago has it. It is steadily improving, whereas Atlanta seems flat and fighting calls to replace Marriota with rookie Desmond Rider.

It was a brutal beat to the Lions, especially being up 24-10, but that helps us here. If the Bears had closed out a 27-20 win, for example, then Chicago is probably the favorite in this game. Atlanta got gashed by an awful Carolina team last week.

Take the value on the Bears and get $200 back when a TD is scored!