#Football
BroBible may earn a commission if you buy a product or service via links in this article.
by Dallas JacksonNovember 24, 2022 9:06 am 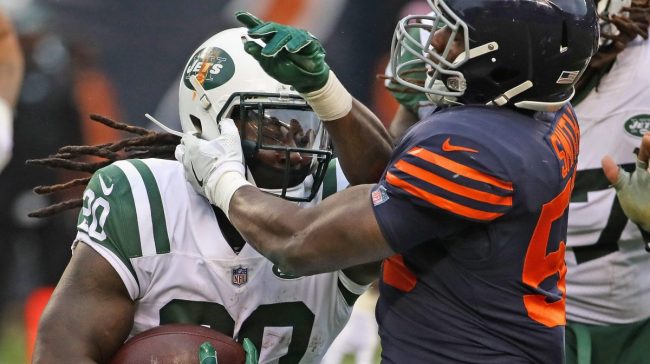 Justin Fields is banged up. Zach Wilson is benched — and will be inactive. If this becomes a Trevor Simien versus Mike White battle it changes things significantly.

Fields said on Wednesday that he is not sure if he will play.  Adding that the pain in his separated shoulder was very high. He is likely to suit up and give it a go, but one tough hit and the day ends for him.

It is a combination that looks like it could need some consideration.

The Bears also lost Khalil Herbert to the IR this week. With a hurt Fields and just David Montgomery in the backfield it could be tough sledding for the Bears suddenly good running game.

If the team rewinds its offensive playcalling to the early season they are not a good bet here.

No matter the quarterback, the Bears will have to keep being aggressive and feed the slot and tight end to avoid Sauce Gardner or DJ Reed. That said, the Jets have had Gardner cover tight ends this season, so if Cole Kmet starts to beat the linebackers or safeties GangGreen could slide things around .

Darrell Mooney is also going to have to have a big game in the slot. If he is also able to avoid the main two cover corners and beat the matchup against Michael Carter II.

Can Mike White make a difference?

Interestingly, this may be an upgrade for the Jets. Wilson stinks. He threw for 77 yards last week and the offense got a whopping two yards in the second half. Hard to be worse.

The supporting cast for the Jets is underrated and it may be because Wilson has missed open play after open play.

At 6-4 the Jets are in the thick of the playoff race. The team is actually good. Defense and skillplayers can be matched against most every team in the league. Switching quarterbacks had to be a tough call to make. It also was likely demanded from the locker room, otherwise there is no chance a swap like this is made.

“This isn’t just a Zach thing,” Jets coach Robert Saleh said this week. “We’ve all got to be better. We’re not going to become the Greatest Show on Turf just because we’re changing out one player.”

I disagree. I think the Jets are a quarterback away from being a real threat. It might not be Mike White, but it isn’t Zach Wilson.

The Jets on the moneyline is still the play & you can get $200 back into your account when the a touchdown is scored!