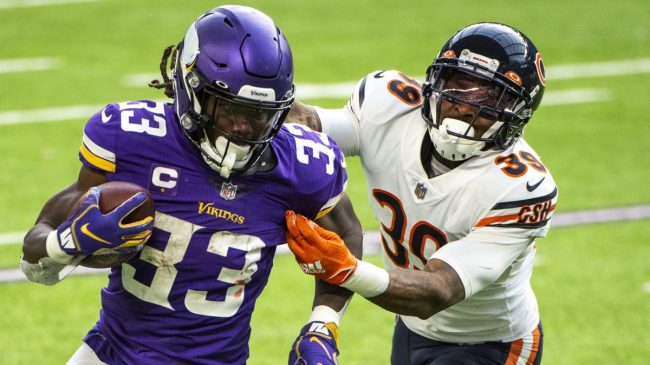 Here is the best news about this game: the bonus is hitting. If you are signing up for a new account to start the year, lock in on this one because at least one touchdown is happening.

Chicago is among the worst defenses in the league. It allows the fifth-worst 369-yards per game and a league-low 27.1 points per game.

Minnesota is not far behind. The Vikings are second worst in both. Minnesota has allowed 396.8 yards per game, with 25.9 going against it.

Now, how do we win the front end of the bet?

I think this game is going to boil down to simplicity.

Minnesota needs to win; the Bears could lock up the No. 1 draft pick with a loss.

Minnesota is discussing what to do with its starters — namely Kirk Cousins and Justin Jefferson — but ultimately, it is more about the offensive line.

Right tackle Brian O’Neill is out. He may be out for the playoffs, but that is not confirmed. Injured center Garrett Bradbury will miss his sixth game in a row — and might be back for the playoffs. His replacement, backup center Austin Schlottmann, went down with a broken leg. Starting at center this week will be backup guard Chris Reed. Or, the third center for Minnesota. Also, tackle Blake Brandel is out and placed on the IR.

It may not matter. Chicago does not want to win.

Moreover, it may not play Justin Fields. Fields opened the game against Detroit on fire but nearly did not finish. The Bears could have taken him out at halftime — and maybe should have. The team is discussing not playing him this coming week. And probably should not.

Without Fields, let’s be honest; Chicago is not winning. That makes it a tough bet to place. Additionally, if Chicago loses and Houston wins, the Bears will land the No. 1 pick.

Houston plays Indianapolis. Indy is going to start Sam Ehlinger this week. It is not trying to win. So, if Houston beats Indy — which it should — that will slide Chicago to the No. 1 slot. While no one is saying they are tanking, this season is flushed. Go all the way with it.

If you simply can not pull the trigger on the Vikings, you can take the Bears and get your free $200 from BetMGM when a touchdown is scored! That bonus is hitting. For me, I’m on the Vikings moneyline. They are winning.