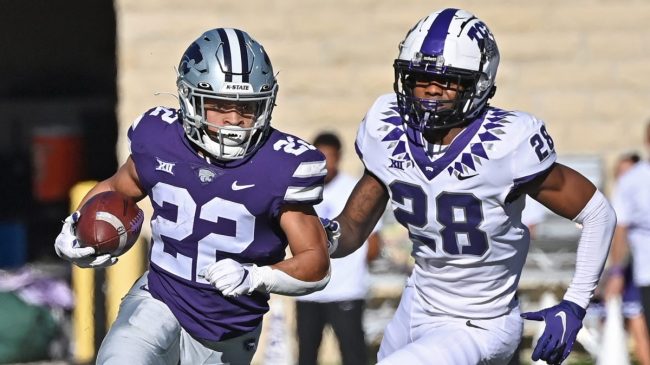 Similar to my success with LSU (3-0), I am a neat and tidy 2-0 with Kansas State games this year. The Iowa State and Texas Tech wins may not have been the toughest of calls, but they cashed for others! Now it is your turn to get right.

No. 17 Kansas State is taking on its toughest test of the year, with No. 8 TCU. On the road. We are going to the window to make money.

Both KSU and TCU are going to run the ball. Each are in the Top-20 in advanced metrics for their rush games and some of that comes from non-running backs. Dual-threat quarterbacks Max Duggan and Adrian Martinez are lighting up the scoreboard and piling up insane stats. The two have combined for 20 passing touchdowns as well as 13 rushing scores. Martinez has yet to throw a pick in 138 attempts this year. Duggan has gotten intercepted a whopping, once.

There is a second part of the rushing equation for K-State, Duece Vaughn. Vaughn was a First Team All-American last season. He has averaged over a 100 yards per game this season as well. Vaughn went for 150 and two scores last year against TCU — the third win in a row for K-State in the series.

Here is where the game turns: only one team plays defense.

The Wildcats are 20th in the country in scoring defense, 25th in passer rating, and 36th in sacks. They will get after the quarterback. They can also slow the run. That does not mean they can not be scored against. The secondary can be had and TCU could exploit that.

It will be on ‘King’ Felix Anudike-Uzomah and Austin Moore to lock down the front seven and make it harder for TCU to attack. Anudike-Uzomah leads the conference in sacks with 6.5. He also has eight tackles for loss and two forced fumbles. His time spent in the backfield will determine this winner. Moore will be tasked with continuing to clean up plays or making them himself. He leads the team in tackles (41) and is second with seven tackles for a loss.

TCU simply doesn’t play defense. It gave up 34 to SMU, 31 to Kansas, and 40 to Oklahoma State in three track meet games. The fact that the team is undefeated, tells you plenty about its offensive ability.

Bottom line is that KSU can move the ball in many ways. Take KSU and get your free $200 when a touchdown is scored with BetMGM.