#College Football
BroBible may earn a commission if you buy a product or service via links in this article.
by Dallas JacksonNovember 13, 2022 1:58 pm 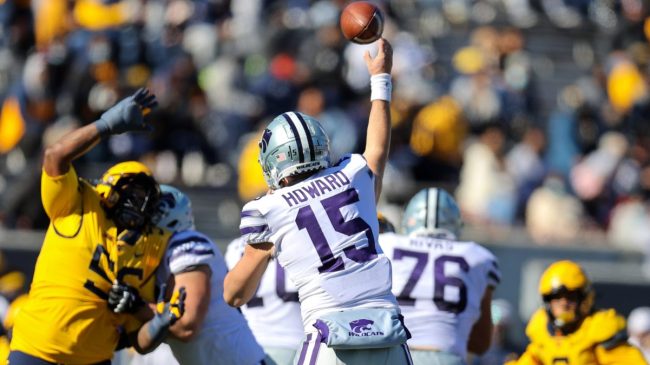 This is a fantastic game for a BetMGM offer because it really is a can not lose for you. You don’t even need to accurately pick the winner. You just wait for a TD to be scored — which, goodness, there will be plenty of those — and you collect.

Kansas State has alternated big wins with disappointing losses for its last five contests. It downed Iowa State before losing to TCU. It blanked Oklahoma State, 48-0, and then lost to Texas at home. Last week it blew out Baylor. So, what will happen in Morgantown?

The Wildcats are still in a prime position to advance to the Big XII title game this year, making this a must-win for the team.

West Virginia, alternatively, is playing for pride. The ‘Eers are just 2-5 in the conference and 4-6 overall. That said, playing for pride is very motivating. It was proven this weekend when WVU was able to battle — especially on defense — to beat Oklahoma, 23-20. Impressively, it was that otherwise porous defense that held the Sooners under 200 yards passing in one of its best performances of the season.

The quarterback carousel for this game is interesting.

Kansas State has found more balance since Adrian Martinez went down and Will Howard re-entered the lineup. The success has largely been due to Howard being the better passer. His aerial ability has opened up more opportunities for all-Big XII performer Deuce Vaughn as well. After the early season Heisman buzz for Martinez, the play from Howard has been inspiring for the upcoming bowl season.

For West Virginia to win, it will come down to quarterback, too. Plain and simple. JT Daniels has been inconsistent — as he has been since he came out of high school as a five-star and among the top recruits in the country. Daniels has only completed 61 percent of his passes this year, with just a 13-to-9 touchdown versus interception ratio. He started his career at USC and then moved to Georgia before coming to WVU. Oh… yeah, he was also benched in the game against Oklahoma.

Garrett Greene was called on to provide some spark to the offense against the Sooners, and it worked. Kind of. The team was down 10-0 when Daniels was handed his baseball hat, and Greene was tabbed to come in. His stats were not impressive, but he was moderately effective in the comeback. He also adds an element of the running game that Daniels does not have.

Here are some more numbers for you: Kansas State is just 1-4 against West Virginia since WVU joined the Big XII. West Virginia has allowed at least two rushing touchdowns and 4.4 YPC in five consecutive games.

The final point here is that the Mountaineers defense has been pretty tough to watch this season. The unit has not created a turnover in three of its past four games and can not stop the run. On offense, it has turned the ball over nine times. For a bully-ball team like Kansas State, that will not suffice.

With this offer — and the money line being what it is — there is value to playing the upset. If you like West Virginia and want to hope to cash in on a fluctuating Kansas State team, there is interest in that +235 opening line. If they lose, you are still adding $200 to your account. So roll the dice on them, Morgantown!

But, if you are looking to cash the play and add to your bankroll, take the Wildcats moneyline and getting $200 back when a TD is scored!