#College Football
BroBible may earn a commission if you buy a product or service via links in this article.
by Dallas JacksonNovember 8, 2022 11:13 am 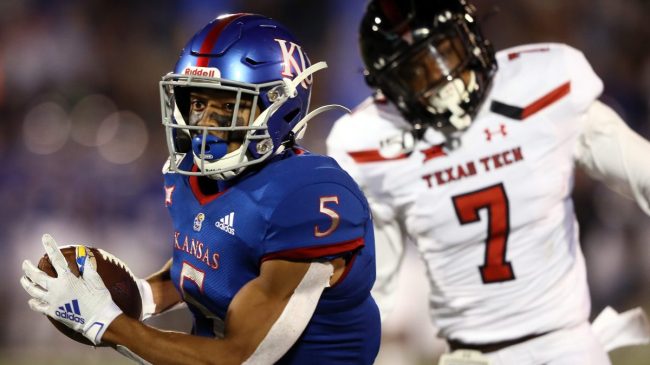 Jayhawk fans, keep the celebration going! I love any time a fanbase gets to go crazy, and yours is no different. Y’all tore down the goal posts last week — and it was the total right move for the historic moment.

Now, keep making money because this team is for real. If you hadn’t bought in before today, you have fallen behind. We were first at the party before the game against Iowa State. And have not faded. A few picks may have come up short, but the support has been there for weeks.

Kansas is going to win this game and keep alive the hopes of a 10-win season.

The reason for the success this season is the offense. The team has shifted through two quarterbacks but has not missed much of a beat. Kansas currently ranks in the Top 10 in several statistical categories. It is averaging 7.24 yards per play — which ranks fourth in the country behind Ohio State, TCU, and UCLA. The Jayhawks also rank fifth in team passing efficiency (174.31), eighth in third down conversions (52.4%), and third in fewest sacks allowed (5). It is too late into the season to dismiss Top 10 rankings as a fluke. That is a formula.

Backup quarterback Jason Bean made his fourth start last weekend. He and running back Devin Neal paced the suddenly-dynamic Jayhawks attack into scoring at least 35 points for a fourth straight game.

The Red Raiders will not be able to slow the actual for the real offense. Take Kansas on the moneyline and get your $200 back when a TD is scored!