#Football
BroBible may earn a commission if you buy a product or service via links in this article.
by Dallas JacksonNovember 14, 2022 4:02 pm 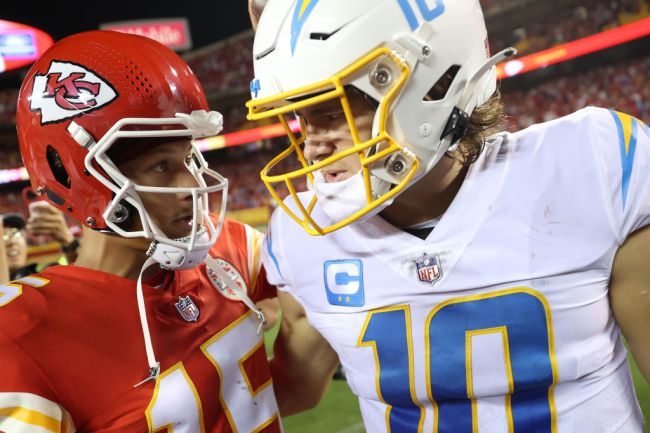 Patrick Mahomes versus Justin Herbert has the potential to be as entertaining of a rivalry as any in recent memory. The markings are there to have battles like Jim Kelly-Dan Marino or Peyton Manning-Tom Brady.

The showdown on Sunday Night Football — which was flexed into this spot over Cincinnati vs. Pittsburgh — has two wild variables at the same position. The Chargers and Chiefs could both be battling this out with their backup receiver groups.

It is the main storyline to pay attention to as the week progresses.

At publishing, it is unclear if the Chargers will have either Keenan Allen (still) or Mike Williams. Simultaneously, the Chiefs could be without one or both of Mecole Hardman and JuJu Smith-Schuster.

The team has not scored over 23 points in any game since Oct. 9; so there exists real concern that without Williams, it would be even tougher to find the endzone. For reference, the Chargers scored 19 in an overtime win against Denver, 23 in a home loss to Seattle, 20 in a win over Atlanta, and a disappointing 16 in the recent loss to the 49ers.

Those are not inspiring numbers.

Kansas City — without its receivers — would still have more than enough firepower. Travis Kelce still plays there. You may have heard of him. Marquez Valdes-Scantling has more targets, catches, and yards than Harman already this season. Jerick McKinnon is a viable threat out of the backfield. Kadarius Toney is making plays as he learns the offense. Skyy Moore secured his first reception in a couple of games as well.

Kansas City has also trended better on the road than at home.

In four road games, the Chiefs have scored over 40 points three times. One of them was hanging 44 on the same 49ers team that just beat the Chargers. Anyways, to finish the point, in five home games, its highest point total is just 30.

There is a lot to like about the Chiefs, but the Chargers will “need it” more.

If Kansas City wins, it would go to 8-2 and be all but a lock to win the division for the seventh straight season. It would leave town with a three-game lead in the division and with two matchups against the awful Broncos, awful Raiders, and awful Texans among the final seven games of the season.

Los Angeles sits at 5-4. Losing this game, and sliding to 5-5, could be a death sentence for the season. It has to be desperate.

Desperation will not get this done. Kansas City plays everyone a little too close, so you may sweat out a win, but drop at least $10 on the moneyline get $200 back into your account when the a touchdown is scored!