BroBible may earn a commission if you buy a product or service via links in this article.
by Dallas JacksonOctober 1, 2022 7:32 am 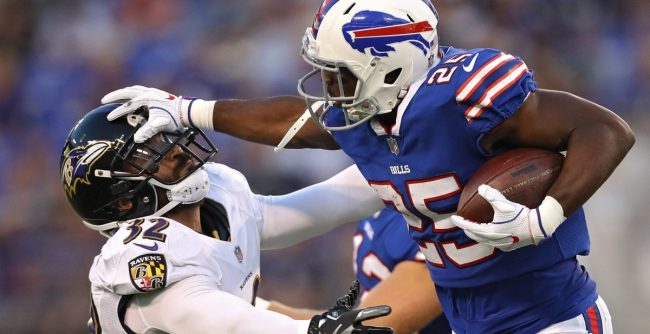 By now you have already heard the hyperbole. This is a future AFC Title game preview. The winner of this is the Super Bowl favorite. Blah blah, talking head, blah. This game is just like any other: a chance to make money.

First, the beauty of this offer is that you are only picking the winner. You can avoid all confusion of the line or totals and make it very simple. Who will win?

When this is the case, it is best to keep it simple.
Simply: Buffalo has the right mix to win this game.

The Bills haven’t played well this season and are still 2-1. Same can be said for Baltimore but conditions and match-ups are also pretty perfect for the Bills to win this game convincingly.

Josh Allen has carried this Buffalo team. Last week he accounted for almost 85% of the teams total yards. That is about to change. The offensive line for Buffalo is about to get healthy. Both center Mitch Morse and right guard Ryan Bates are on track to play — combined with the fact that Ravens’ stud lineman Michael Pierce won’t play and the team could be without edge rusher Justin Houston, it makes that situation much better.

If the Bills can muster any run game this can become a blowout.

The rest of the offense should be able to stay in sync. The Ravens have already been torched by offenses far worse than Buffalo; with passing games far less than the Allen-Diggs-Davis trio.

On the flip side of the trenches, Baltimore has a banged up — putting it nicely — offensive line.

There are some rumors that Ronnie Stanley might be back but it will not slow a Bills front that does not need to blitz to get pressure. Combined with the Ravens still struggle to move the ball through the air — not an indictment on Jackson, he has been good, his receivers just aren’t anything to write home about.

It is also the Bills ability to not blitz that makes them the better bet.

The Patriots and Dolphins both thought throwing the sink at Lamar Jackson was the play. It was not. The two teams combined to send a blitz on nearly 50% of their plays and Jackson blew their doors open with three touchdown passes in each game … while also maintaining his rushing stats.

Buffalo doesn’t blitz. The Bills are more likely to spy Jackson and make him beat them than they are to send extra players and allow him to run. With a rainy game expected, this is a trenches game. The Bills defense perfectly aligns to slowing Jackson. Its offense attacks at the right spots to take full advantage of the Ravens weakness.

The Ravens play well at home, but they are not going to be ready for the Bills. With injuries and weather playing a role, take the moneyline and get your free $200 from DraftKings!